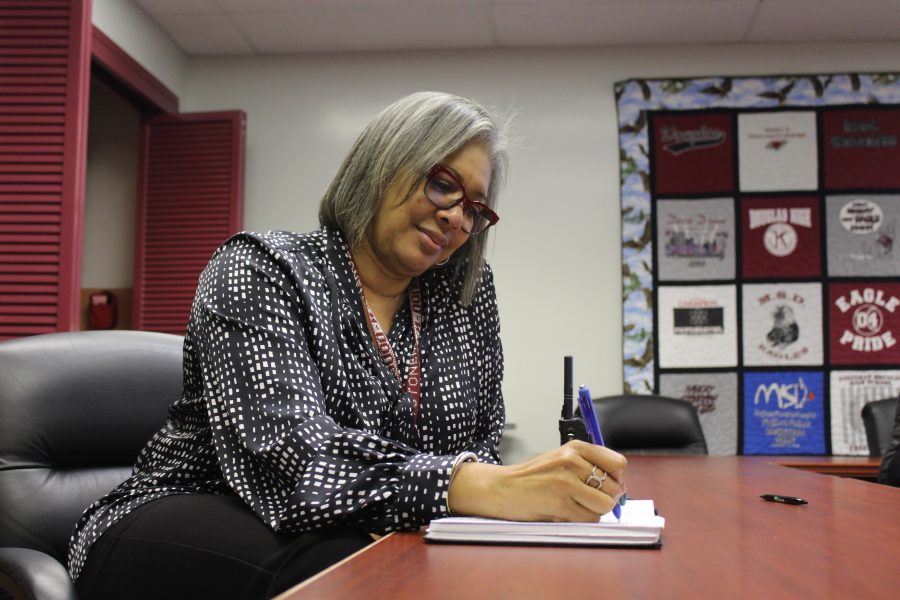 On Task. Principal on Task Assignment Teresa Hall works in the principal’s conference room in the main office. Photo by Nyan Clarke

The start of the 2018-2019 school year at Marjory Stoneman Douglas High School was marked by countless recovery concerns, from the installation of portable classrooms to managing the wellness center. MSD introduced new staff to manage the school’s changing dynamic. Teresa Hall came to the rescue to assist Principal Ty Thompson as principal on task assignment.

As principal on task assignment, Hall is charged with many of the responsibilities that arose from the events of last year. In order for Thompson to resume his previously existing duties as principal, Hall has assumed charge over the installation of portables, the new building construction and the wellness center.

“I was task assigned to MSD for this upcoming year to provide assistance to Thompson while he handles his busy schedule,” Hall said. “[For construction of the new building] I had to pick an architect, which was a long process because I had to listen to several presentations and the next step was to find a builder, who was chosen just last week.”

While this is her first official year at MSD, Hall is quite familiar with the school. She served as an administrative intern to the school district last year and was assigned to MSD after Feb. 14.

This year, Hall’s duties fall under the umbrella of leading the school, which she has a great amount of experience with.

“I’ve been a principal for a total of eight years. I opened West Broward High School as an assistant principal for two years, working with the former principal of MSD, Dan Traeger,” Hall said.

She then worked as a principal at Attucks Middle School in Hollywood, Florida for an additional two years. When the principal from West Broward retired, Hall was called back to fill his shoes.

While she is excited to be at MSD, she still misses her old job.

“[West Broward High School] was not just the first school I worked at, but was like my second home,” Hall said. “I opened it with people I’ve now known for so many years and I feel like I’m being irresponsible just leaving it. It was very emotional and difficult for me.”

Although she had a hard time leaving, Hall is optimistic about her upcoming year at MSD.

“I was very worried about getting to know the new staff and how people would view me as a new member, but I ended up feeling very welcomed. The staff and the students are also just fantastic.” Hall said. “My main goal for this year is to give any assistance the students and teachers need.”

Outside the heavy demands of the school environment, Hall takes any chance she can to relax and enjoy her passion of water activities.

“I am already looking forward to break, when I can go on my boat and go sailing,” Hall said.

Her ideal vacation consists of sitting on the sand, reading a book and enjoying the serenity of water.

“The only thing holding me back from sailing would be the alligators on the lake,” Hall said.

While many of her responsibilities fall in uncharted territory, Hall faces them head on. Even though the length of her term is still undetermined, she is a proud eagle through and through.