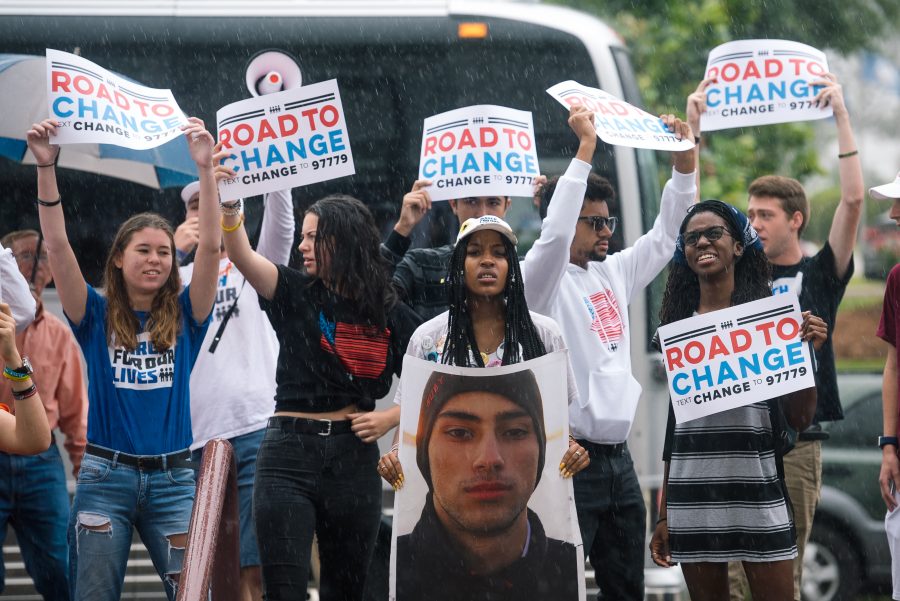 At the March For Our Lives on March 24, 2018, Marjory Stoneman Douglas student Cameron Kasky welcomed the 800,000 protesters in Washington, D.C. and the millions watching at home to “the revolution.”

Over 800 cities across the country were ablaze with the fiery anger of hundreds of thousands of protesters who claimed they were tired of gun violence in America.  But after that day, the question remained: What comes next?

In their speeches on March 24, the March For Our Lives organizers pushed their audiences to utilize their right as citizens to vote, specifically in the upcoming November midterm elections. To prepare the country for the elections and to spread their message, the organizers embarked on a two-month bus tour in over 20 states and in all 26 congressional districts of Florida, called their “Road to Change.”

“I was brainstorming after the March with the other leaders and we wanted to go into communities where this affects people most. We knew the only way to do that was to… hop on a bus community to community the old fashion way,” senior Jackie Corin, who is the lead organizer of March For Our Lives, said. “It was definitely the right move…We were going to support all the people that supported us that day.”

The tour had multiple purposes. The first goal included engaging with activists and survivors of gun violence all across the country in order to gain new perspectives. Secondly, the organization wished to educate voters on gun violence and the influence of the NRA, opening their eyes to how common-sense gun reform is reasonable. Finally, the tour made a major push throughout the summer to register as many citizens as possible, especially young people.

“I feel like before the tour, people connected with the movement, but never really got to be a part of it. We really wanted to bring that to them and talk to them on a one-on-one level and see how March For Our Lives could help them make a difference in their communities,” senior John Barnitt said. “We wanted them to know their voices mattered, especially when it came to voting.”

The National Road to Change Tour was organized primarily by Corin and student activists in each city they visited. In order to visit all of these states, the group separated the tour into three legs. The first visited the Midwest, from Chicago, Illinois to Standing Rock, North Dakota; the second leg visited the Southwest, from Dallas, Texas to Oakland, California; the third leg visited the East, from Charleston, South Carolina to Newton, Connecticut.

The entire tour was kick-started, though, with the annual Peace March in the Southside of Chicago, an event that tries to bring unity to a place where gun violence is a prevalent issue  often times connected to gang violence and domestic violence.

“The Peace March…was one of the most amazing experiences in my life. I’ve never really been exposed to inner-city gun violence before, but it really struck me,” sophomore Lauren Hogg said.  “My friend that I met said gun violence there was like when you ‘lock two lions in a cage together.’ It made me realize that inner-city gun violence is due to a lack of resources, not because people just want to shoot each other.”

Each of the 41 stops on the National Tour, including Chicago, were strategically chosen to make the most impact, both on the March For Our Lives organizers and on the residents of the places they were visiting.

“We chose certain stops for multiple reasons: one was if there was a lot of NRA money running through that area, another was if there was a lot of gun violence in that area or a large amount of activism from students, like Ferguson,” Corin said. “We looked at previous voter turnouts and decided to go to places where even if we registered 1,000-2,000 young people; hopefully those people could make a difference in the upcoming midterm election and be the swing vote.”

Many of the stops on the National Tour were in urban areas like Chicago and Oakland, where people are killed daily by guns. Others, like Standing Rock, were chosen because of their very prevalent activist groups, with whom the March For Our Lives organizers wanted to make lasting connections with.

No matter the reason, there were multiple events planned at each stop with student activists and residents. These events usually consisted of round tables with the city’s own March For Our Lives chapter and a town hall where residents could come and ask questions about policy, midterms, gun violence and the organization’s future. At many stops, the organizers would take activists from each city with them on the bus tour for multiple stops.

“The most inspirational people that I met were the people we took on the bus with us from all over the country; activists like Bria Smith from Milwaukee…Alex King from Chicago and Ramone Contrares from Harlem,” Corin said. “They all inspire me to be a better person every day…and I’m still friends with all of them.

Similar events and experiences were created on the separate Florida Road to Change Tour. As the National Tour was traveling the country, the Florida Tour was simultaneously traveling to all congressional districts in the state of Florida, as well as cities in Georgia, Alabama, Mississippi and Louisiana.

MSD seniors Adam Alhanti and Barnitt were two of the organizers of the Florida Tour — working day-in and day-out to secure venues and organize correspondence with people in each stop.

“March For Our Lives originated in Florida and we really wanted to impact our own state as we were trying to impact the nation,” said Alhanti. “Florida is one of the most powerful states in the country.”

Corin also expressed the importance of a separate Florida Tour, emphasizing the state’s history with gun violence and representatives who take money from the NRA.

“It was super important to have another tour going to all of the districts in Florida because ultimately, Florida is our home. We want to make sure that no other community in Florida is affected like Orlando after Pulse or Parkland was and the everyday shootings in Liberty City and Miami,” Corin said. Our governor now running for senate takes a lot of NRA money and many governor candidates were taking lots of money from the NRA, and we wanted to make sure that all of these communities were aware of how destructive these people would be in office.”

Just as in the National Tour, the Florida organizers had the opportunity to meet with and talk to young activists who had similar goals as them, and were inspired by the organization’s work after Feb. 14.

“I learned that young people are so much more capable than society makes them out to be,” Barnitt said. “I was so inspired by all these young people who had accomplished and put forward so much for a cause that hadn’t even affected them directly…I guess I didn’t really understand how many people we impacted until I got to see them in person.”

Once both tours had finished — the National Tour ended with a rally in Newtown, Connecticut and the Florida Tour concluded with a town hall in New Orleans, Louisiana — it was evident that both groups felt accomplished.

“The Road to Change was super successful. We registered tens of thousands of voters and engaged hundreds of thousands of people…and it really gave me hope for the future,” Hogg said. “We are seeing a political shift in America… and [I know because of this tour] that in the future when there is injustice, there will always be young people to stand up for what’s right.”

The organization and the country will not be able to measure the success of the Road to Change tour until November, when the ballot boxes are filled. Once the votes are counted and representatives are elected, there can be a true understanding of whether or not March For Our Lives has changed the political climate in the United States.