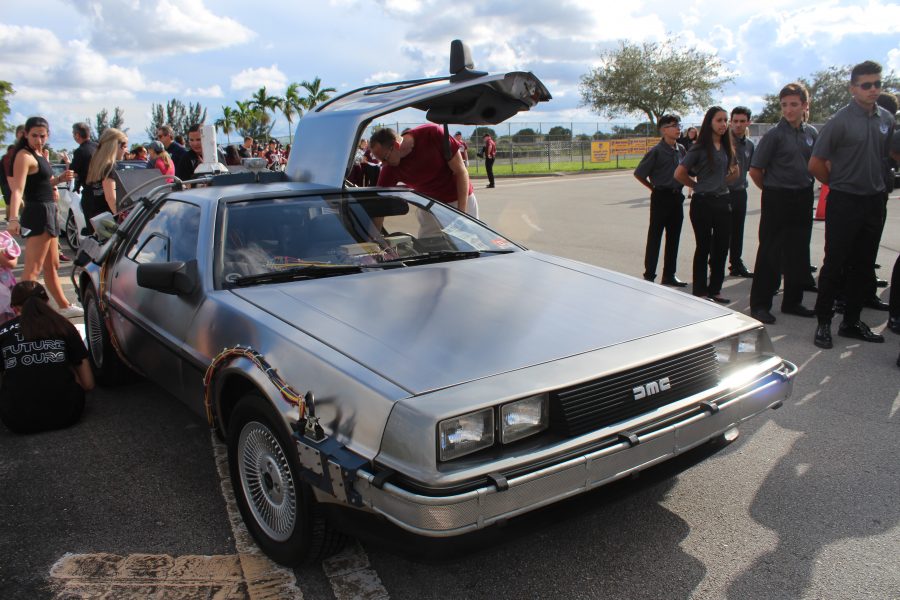 Blast from the Past. The Delorean makes a surprise appearance at the Homecoming parade.

Spectators at the annual Homecoming parade on Sept. 7, 2018 experienced a special “Back to the Future” surprise, when a Delorean made a memorable appearance.

This year’s Homecoming theme was  “Back to the Future,” based off of the iconic hit movie released in 1985. The Delorean was featured in the “Back to the Future” movies as a time traveling car, which plays a legendary role in the movies.

“SGA decided to choose this Homecoming theme because we thought it would get the most amount of people involved, considering the movie is so popular,” Student Government Association President Jackie Snytte said. “Also, we thought everyone would have fun dressing up as different periods of time throughout the week.”

“It’s exciting to dress up for our grades with our friends,” sophomore Sydney Walker said.

When she found out the Homecoming theme, Senior Class Vice President Ma’ayan Mizrahi came up with the idea to rent a Delorean for the parade. She wanted to incorporate the theme into the parade so that there could be more involvement from MSD students.

“Because this is one of the first big events this year at the school, it was one of our goals to have the most participation that we’ve ever had, so we tried our best to have all of the clubs come, and since the Delorean was there, many people were really excited,” Mizrahi said. “People took pictures and it made everyone a lot more hyped and excited for Homecoming.”

The process began with calling companies that rent out Deloreans. After speaking with a couple of businesses, Rent The Delorean gave a discount on the rental and were willing to work with Mizrahi and SGA.

According to the owner of Rent The Delorean, Adam Kontras, it should have cost SGA $2,500, but he only charged them $800.

“If we could’ve done it [rented out the car] for free, we would’ve,” Kontras said. “We went as low as possible with the considerable transportation.”

The car had to be transported by trailer from Tampa, FL. The price included gas, hotels and other expenses.

The Delorean that was rented for the parade was not the same car from the movie, which actually featured four different Deloreans. However, it was extremely similar to it. The car driven in the parade includes original parts that were purchased from the same hardware stores in Burbank, California where the crew of “Back to the Future” pieced their cars together.

“The added touch of the Delorean gave our parade a unique touch,” sophomore Madeline Dwyer said.

The Deloreans were first manufactured by John Delorean’s Motor Company for the American market from 1981 to 1983. It is a sports car with gull-wing doors. Only 8,583 Deloreans were ever produced.

Principal Ty Thompson rode in the passenger seat of the Delorean as Jim Carroll, an employee of the rental company, drove.

“It [riding in the Delorean] was extremely cool,” Thompson said. “I’m a boy of the 80’s. I grew up in the 80’s; I was all about ‘Back to the Future,’ so it was cool to be able to be in the Delorean and to check it out. It was such an awesome experience.”

Homecoming week concluded with a varsity football win on Sept. 7 against South Broward High School and the Homecoming dance held at the Fort Lauderdale Marriott Harbor Beach Resort on Sept. 8, where seniors Hunter Reilly and Jessica Frengut were crowned Homecoming King and Queen.