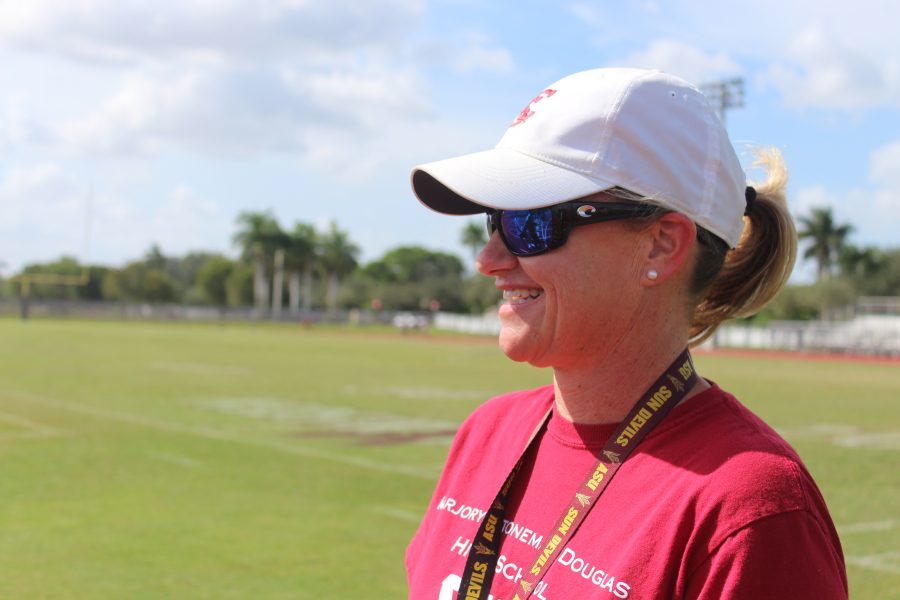 Warming Up. Coach Robyn Mickow leads the cross country teams through warm-ups on Oct. 2. Both teams competed at a meet the next day. Photo by Nyan Clarke

Change is never easy, especially when it comes down to the one person a team looks up to the most — a coach. The Marjory Stoneman Douglas High School cross country teams underwent major changes in the 2018-2019 school year due to the events of Feb. 14.

The teams were devastated by the passing of their coach, Scott Beigel. Knowing that filling the spot of Biegel would not be easy, the teams looked to geography teacher Robyn Mickow to fill the position. Mickow also coaches the MSD track teams.

Mickow did not hesitate when given the option to coach both the men’s and women’s cross country teams. The experience of coaching track created a smooth transition for her, as well as the team.

“The position just sort of came to me. It just happened during track, which I was coaching at the time,” Mickow said. “A lot of the long distance runners for track, ran for cross country as well.”

Originally living and working in Arizona and California, Mickow moved to Florida 12 years ago. Since then, she has taught at MSD for four years and has coached the track team for two. She gained a passion for running when she ran for the cross country team during her own time in high school.

Some continuity and familiarity remains for the teams, as training coach Bob Oelschlager has continued as the team’s training coach. However, with Mickow as coach, there is a slight difference from previous years.

“I’m sure there has been a change in coaching. This is because I’m different than Scott was. I have a different personality,” Mickow said.

Since the start of the season in August, Mickow has grown close with the runners. Now that she teaches in the new portables, she frequently allows the team to meet up in her room before practices.

“The new coach [Mickow] has been absolutely amazing,” sophomore Brett Lickerman said. “She is so welcoming and fit in with our team right away. Just like Biegel, she truly cares about us.”

The women’s cross country team is currently ranked first in the region. With a successful season already, the team is hopeful that both the men’s and women’s  teams will attend States.

“At our last City Meet, we took top five places, winning first place as a team. For the [men’s] team, we have recruited strong runners, and past runners have gotten stronger,” team captain Alyssa Fletcher said.

The team will continue to honor their former coach through memories and their newly designed t-shirts. On the back of the shirts is adorned with a phrase Biegel would frequently say to his team before meets — “Just run faster.”

“This year we are really doing it to honor Coach Beigel,” Mickow said. “The team honors him by their behavior each day. They also just speak about him in such great terms. They miss him.”

With help and guidance from their new coach, cross county teams will run towards first place at States in honor of coach Biegel.