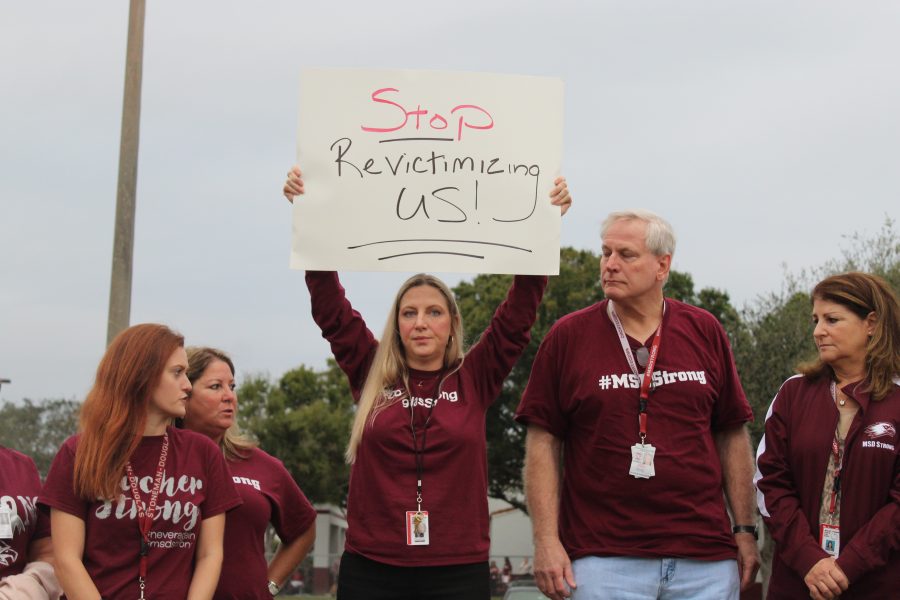 English teacher Felicia Burgin protests in front of MSD with other teachers. Photo by Nyan Clarke

At 7:15 a.m. at Marjory Stoneman Douglas High School’s marquee over 60 faculty members met, signs in hand, and stood in protest.

After the decision to remove and investigate Assistant Principals Winfred Porter, Denise Reed, Jeff Morford and Security Specialist Kelvin Greenleaf from MSD, many faculty members were confused and frustrated by the decision. So with a determined state of mind, they planned a protest.

A last minute faculty meeting was held immediately after school on Monday, Nov. 26 where the teachers were told of the administrative reassignments. Directly following this, a small group of agitated teachers held their own meeting where they started to draft a letter. During the teacher’s meeting, they decided the best way to fight this decision was with a protest.

CNN and other local media stations were notified about this planned event in hopes of gaining as much attention of possible.

“I felt that we were successful with the teacher protest because I know myself and many other people were able to speak to the press were able to convey our concerns to them and they were able to understand why we were there,” history teacher Gregory Pittman said.

During the protest, teachers held signs, chanted “bring them back” and were interviewed by local news channels. English teacher Dara Hass held a sign that read “we are strong together keep us together,” and English teacher Debbie Jacobson’s sign read “I was hired by Denise Reed and Winfred Porter.” Debate teacher Jacob Abraham held a sign that asked “who is this helping?”

This protest was a show of unity for the staff and administration in a time of such uncertainty for many at MSD.

“I felt that it was very necessary for us as a family and as a school to collectively join together to show support for our administrators and staff members,” drama teacher Melody Herzfeld said. “The goal of the protest by the teachers is that it shows some light of the importance of having a cohesive staff and administration and teachers at the core of the school.”

MSD faculty plans to continue to share their views and protest these administrative changes, starting with attending a school safety meeting on Tuesday, Nov. 27 at 6:00 p.m. at Piper High School