Instant Family provides viewers with the good, the bad and the ugly of the parenting and the foster care system. 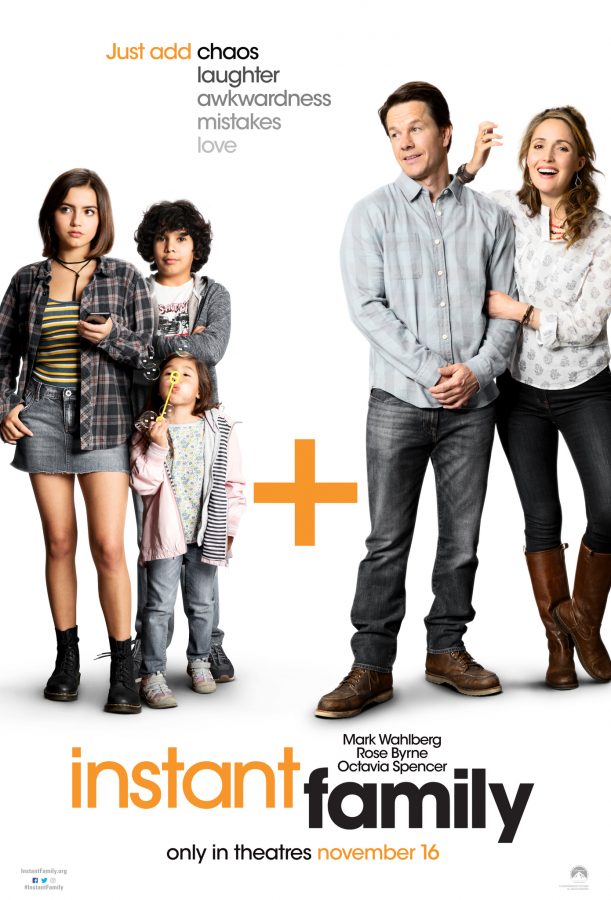 On Friday, Nov. 16, 2018 the heartwarming film Instant Family hit theaters around the world. The film features hollywood stars, such as Mark Wahlberg, Rose Byrne, and many more. The movie was directed and produced by Sean Anders, and also produced by Wahlberg.

The movie follows the life of married couple, Pete (Wahlberg) and Ellie Wagner (Byrne), as they navigate through their day to day lives. They appear to be a typical middle aged couple with a beautiful home and a a “perfect life”. The couple starts to realize there is a missing link in their family. When they discuss having a child, they prefer adoption.

Pete and Ellie, at first, are not open about adopting an older child.  After coming across a feisty, stubborn teenager named Lizzy, they chose her as the child they wanted to foster and then later adopt. Not to mention, Lizzy also came with two younger siblings, Lita and Juan, whom they also choose to adopt.

The film goes truly into depth about the problems with the foster care system and how couples often prefer to adopt babies, neglecting the older kids. The storyline also gives the audience a view into the legal process and factors that go into adoption, such as background checks, meetings, parenting classes, fostering, etc. The rest of the film shows the good, the bad, and the ugly, of parenting and issues with teenagers such as, dating, sexting, and stubbornness.

The motion picture hits very close to home for the writer and director, Sean Andres, who wrote the movie inspired by his experience with adoption. In 2012, Andres and his wife Beth decided to adopt 3 kids of their own.

Andres wanted to make this film as a way to tell his story and raise awareness for the flaws in the foster care system. Instant family is a very different film style for director Anders, who normally takes on more dark-humored and adult oriented films such as, Daddy’s Home and Horrible Bosses.

The movie is very heartwarming, but does include many mature topics and vulgar language which might not be suitable for younger viewers.

Although very predictable, Instant family includes many twists which are entertaining to watch. The movie perfectly mixes the right amount of sadness, awareness, comedy, and love.

Overall it was enjoyable and the director perfectly told the touching story while portraying an important message. Nevertheless, I also enjoyed the soundtrack in this movie, in particular one song that was sung by the actress who portrayed Izzy (Isabela Moner).