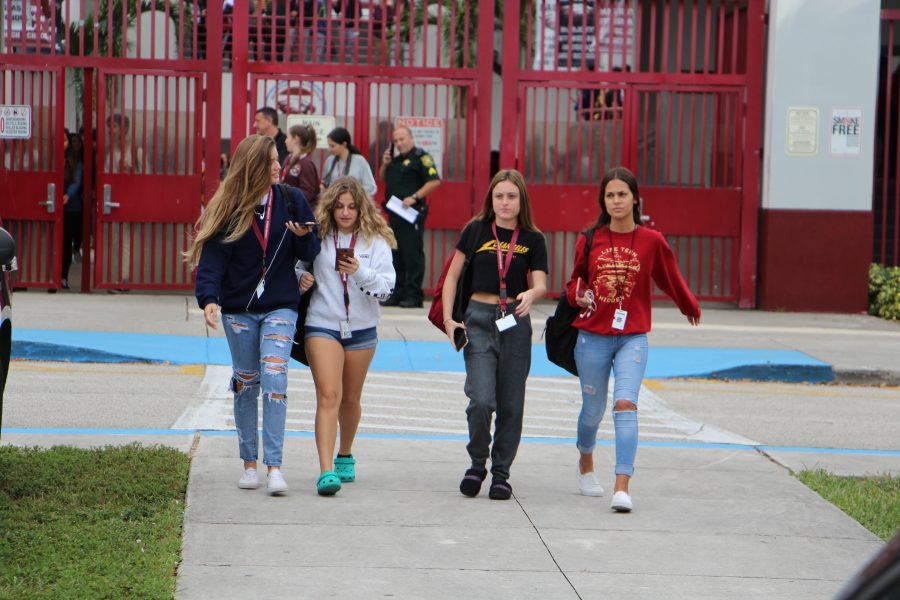 On Nov. 26, it was announced that Marjory Stoneman Douglas High School assistant principals Jeff Morford, Winfred Porter, Denise Reed and Security Specialist Kelvin Greenleaf would be reassigned in light of concerns brought forth by the Marjory Stoneman Douglas Public Safety Commission. In the meantime, the members in question will be working office jobs within the district.

Broward County Superintendent Robert Runcie, who promised to take action against MSD staff members within one week in his testimony before the safety commission on Nov. 15, made the decision to reassign Morford, Reed, Porter and Greenleaf pending an independent investigation into their actions.

Many students and staff were upset by the abrupt changes.

The following morning at 7:15 a.m., over 60 faculty members met at the school’s marquee sign, with signs in hand, and stood in protest.

“I felt that we were successful with the teacher protest because I know myself and many other people were able to speak to the press and were able to convey our concerns to them and they were able to understand why we were there,” history teacher Greg Pittman said.

During the protest, teachers held signs, chanted “bring them back” and were interviewed by local news channels. English teacher Dara Hass held a sign that read “we are stronger together, keep us together” and debate teacher Jacob Abraham held a sign that asked “who is this helping?”

For many, protesting was a show of unity for the staff and administration in a time of such uncertainty at MSD.

“I felt that it was very necessary for us as a family and as a school to collectively join together to show support for our administrators and staff members,” drama teacher Melody Herzfeld said. “The goal of the protest by the teachers is that it shines some light on the importance of having a cohesive staff and administration and teachers at the core of the school.”

Many students took to social media to plan their own protests for Tuesday, Nov. 27.

The first event was a walkout at 10:48 a.m. and the second was a sit-in located in student services at 1:15 p.m. The students participating in both events were advocating for the four staff members to returned to campus.

Instead of completely walking off campus, some students formed groups on the grass outside of the school to protest the reassignments. As they were standing outside, students chanted “bring them back,” while news helicopters flew overhead capturing the event.

“It’s not fair. Since it’s what we’re familiar with and what we know is them and our community because we know what we went through together, and people coming in, like new people, who don’t understand, it will just make it harder for the students,” junior Lily McMullen said.

During the sit-in in the front office, students held posters demanding that their administrators be brought back.

“I’m here today because I feel as if it is insensitive, and it does not make any sense,” senior Naomi Davidson said. “You cannot just go to a school and take people out who have been here the longest and have seen people grow since freshman year. If you have a speculation or idea about something, you can’t get up out of nowhere and take someone from their job. You have to ask questions and ask questions to the right people.”

To acknowledge the students, Assistant Principal Daniel Most, leadership teacher Danielle Driscoll and Principal Ty Thompson tried to answer any questions that the students had.

“Robert Runcie is specifically the person who has made these decisions that are concerning you. It’s all him, he himself alone,” Principal Ty Thompson said to the students participating in the sit-in protest. “It is important that he is the one who hears these concerns that you all have and that is the message that I am telling parents and staff that have contacted me.”

The small group of students continued their sit-in until the bell rang at 2:40 p.m.

While many within the school’s community have been vocal about their disapproval of the staff reassignments, others strongly support Runcie’s actions. Supporters point to the hours of testimony that has been presented to the safety commission as proof that the reassignments are necessary.

“These individuals have been reassigned due evidence found by the Marjory Stoneman Douglas Public Safety Commission,” Max Schachter, father of slain MSD student Alex Schachter and commission member, said. “This is an investigation into finding out what happened and the causes and fixing those failures so it doesn’t happen again.”

Those in support of the commission feel as though this is the first step in holding people accountable for what occurred on Feb.14 and were greatly disappointed by the protests.

“The children have to keep in mind that the most important thing is them going home to their parents every day,” Schachter said. “If that doesn’t happen, like it didn’t happen for my son and the other 16 victims, then nothing else matters.”

Schachter is among many of the victims’ families who have been vocal about the need for accountability in the wake of the shooting.

Assistant principals Ron Adam, Teresita Chipi, Danny Lechtman and Darius Saunders replaced the four MSD staff members. Three of the four have personal connections to the school, as they are former MSD teachers or administrators.

While students and staff are grateful for their familiarity with the MSD community, many have expressed that they will miss the support provided by the previous leadership in the healing process after Feb. 14.

Morford, Porter and Reed filed a lawsuit on Sunday, Nov. 30 against Runcie and the School Board of Broward County for not following protocol when they were being reassigned. The reassigned administrators were told that they were being investigated, but not told what the investigation was about.

“There were things that could have been done differently on a lot of different levels, but I think that ultimately the person who should be held accountable is Robert Runcie,” English teacher Katherine Posada said. “He is not being held responsible at all and seems to be passing the blame onto others, which is not fair at all.”

An integral component of the culture at MSD, in this case its leadership, was transformed once again with abrupt staff changes. Whether these changes were for better or for worse, have yet to be revealed as the public safety commission continues its investigation and releases its final report at some point in January.