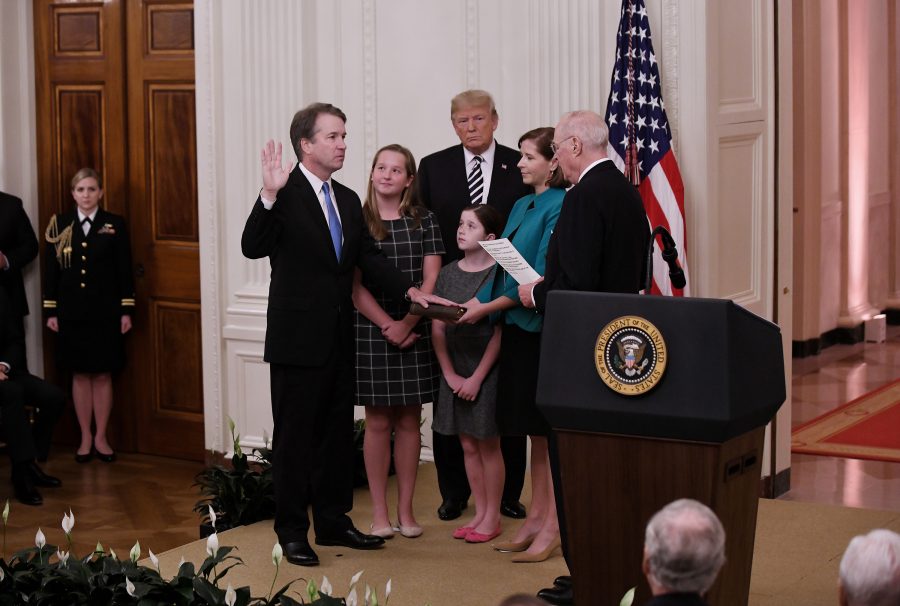 By one of the smallest margins for a U.S. Supreme Court nominee in American history, Brett Kavanaugh was confirmed on the Senate floor on Saturday, Oct. 6.

This confirmation by a vote of 50-48 resulted in a major victory for the Republican party and a conservative majority in the Supreme Court.

Kavanaugh was nominated by President Donald Trump in September 2018 in an attempt to fill the spot of retiring justice, Anthony Kennedy. The seat was the second Supreme Court vacancy filled by Trump since he took office in January 2017.

The Federalist Society listed Kavanaugh on a list of 25 judicial candidates recommended to Trump. Most of these candidates were judges with experience in the federal court system.

“They’re all fine candidates,” Federalist Society associate Leonard Leo said in an interview with CBS This Morning. “You could throw a dart at that list and in my view, you’d be fine.”

In 1993, Kavanaugh served as a law clerk to Justice Anthony Kennedy, gaining hands-on experience in the judicial system.

Prior to his nomination, Kavanaugh gained judicial experience serving on the District of Columbia Circuit Court since 2006, the same court from which current Justice Ruth Bader Ginsberg also served on.

Since his nomination, Kavanaugh’s political history in the Republican Party has been subject to controversy. Many of Kavanaugh’s judicial rulings have fallen in line with the President Trump’s values.

Despite the support shown from the GOP and Trump, many on the left have opposed Kavanaugh’s Supreme Court nomination, especially after psychologist and professor Dr. Christine Blasey Ford accused him sexual assault in the midst of the nomination process.

In one of the most polarizing controversies of the year, this sexual assault allegation galvanized hundreds of thousands of Americans to fight both for and against Kavanaugh’s confirmation.

The official hearing for Kavanaugh’s confirmation began on Sept. 27, and it addressed these sexual assault allegations. He was also questioned on his abortion views, his alcohol intake in high school and college, and his opinion on presidential powers.

This accusation and the public response to it led to a week-long FBI investigation to examine Kavanaugh’s moral integrity. Its results, however, made no conclusive claims for Kavanaugh’s case. Thus, the Senate Judiciary Committee voted to send Kavanaugh’s confirmation to the Senate floor.

Despite the backlash from many, every Republican and one Democrat in the Senate voted to confirm Kavanaugh.

Now seated on the highest court in the United States, Kavanaugh faces the challenge of proving to his critics that he deserves this judicial responsibility and that he will preside with integrity and objectivity.