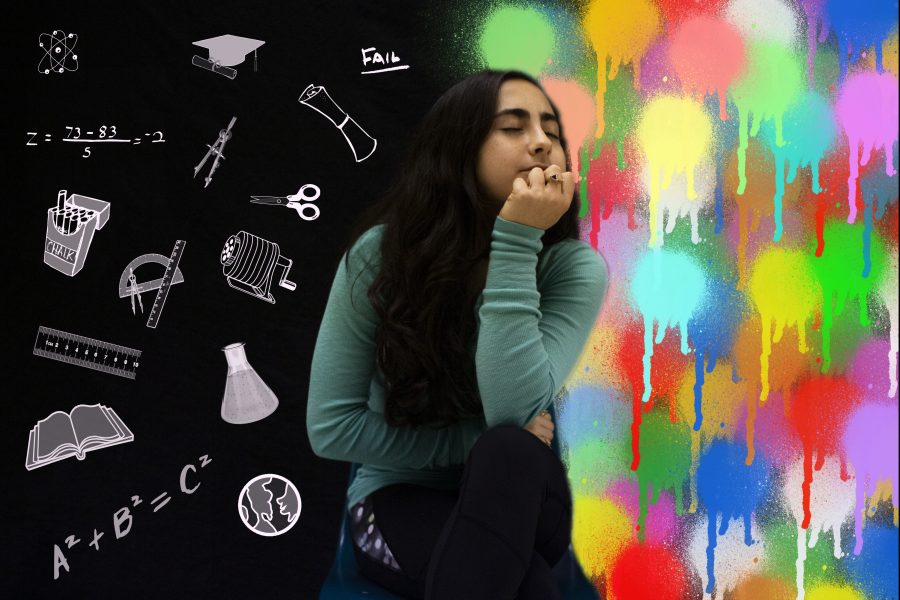 The imagination of a child knows no bounds. Whether it includes carelessly finger painting a canvas with a rainbow of colors, building a Lego tower so tall and believing it is a skyscraper, or playing on a swing set and feeling only a short distance away from the sun and moon, the creative times of childhood gradually fade by the neverending demands of adulthood.

As a child grows up, they can feel like just another number in the school system. Students go to school five days a week for seven hours each day, typically sitting in rows of desks, staring at a teacher lecturing.

According to “Imagine: How Creativity Works,” by Jonah Lehrer, a Contributing Editor at Scientific American Mind, a child’s self-perception of their creativity declines significantly from when they start kindergarten to when they reach high school.

The reasons why a child may feel less creative as they grow up can may stem from the institution of school itself, as well as the growing feelings of insecurity about having to find a more realistic career.

However, this can not account for those who believe that school is a place where creativity lets loose and allows an open space for them to find their passions in life. Schools provide many interactive activities and extracurricular clubs for student to explore their interests.

The debate over whether or not school helps or hinders students’ creativity has yet to be settled, especially among students themselves.

Creative thinking can be defined as “making new connections between different regions of the brain, which is accomplished by cultivating divergent thinking skills and deliberately exposing ourselves to new experiences and to learning,” according to Psychology Today.

Some students believe that their creativity levels depend on the classroom environment and teacher with whom they are learning from. These kinds of students tend prefer interactive activities with other students, rather than typical powerpoint presentations.

“If you are sitting at desks, you only talk to the other person to ask them a question about the work, but if you are all forced to sit at a large group table, it allows for more social interaction and creative ideas to flow from person to person,” junior Stacie Sayers said.

Other students see the importance of lesson plans and organization in a classroom setting. According to a blog by Concordia University Portland, creating “learning stations” instead of rows of desks helps to maximize creative learning.

“Some teachers will give you activities that allow for creativity to flow and others give you assignments that restrict creativity,” junior Hailey Carpenter said. “I hope to be a teacher when I’m older. It makes me want to allow for more freedom on assignments that would promote creativity rather than restrict it. When a classroom limits creativity, most students don’t want to do the assignment since they can’t have fun with it.”

Carpenter discovered her profound passion in the school system last year. While in the exploratory teaching course offered at MSD, she quickly became interested in the idea of becoming a teacher when she grew up. This led her to become president of the MSD chapter of Florida Future Educators of America this school year.

Along with students like Carpenter, Principal Ty Thompson believes that high school provides the resources for students to expand upon their interests.

“The nice thing about high school is that it gives kids a large variety of opportunities to explore certain things which allows them to be creative in their own way,” Thompson said. “Some kids may be good in arts, so they take the arts route; other kids may like cooking; while others may like marketing. High school provides such a different type of curriculum, and it allows students to maybe pick a niche or even experiment with what they may want to be creative with to make a determination with what they want to do with their lives.”

However, some students insist that school greatly limits their abilities to be creative and successful. A portion of students feel this way because they are required to take core classes each year, even if they are not interested in them. When they are out of the school environment, these students flourish significantly, finding interests that they excel in.

“[In school] you are focusing on academics, and you don’t really have time to really express yourself fully, especially if you are just taking mostly core classes. You are kind of focused on only one thing, not what you want to be doing,” class of 2016 alumnus Kamil Kisielewicz said. “I found my passion [for writing and photography] when I was out of school. I found it through exposing myself through new things every day.”

Students view their school in regards to creativity either negatively or positively. While the ones that look at the educational system with a pessimistic attitude tend to view school as a “waste of time,” the optimistic thinkers believe that high school gives them the ability to step outside of their comfort zones and dabble in  different subject areas to discover their interests before college.