President Donald Trump is to blame for the government shutdown 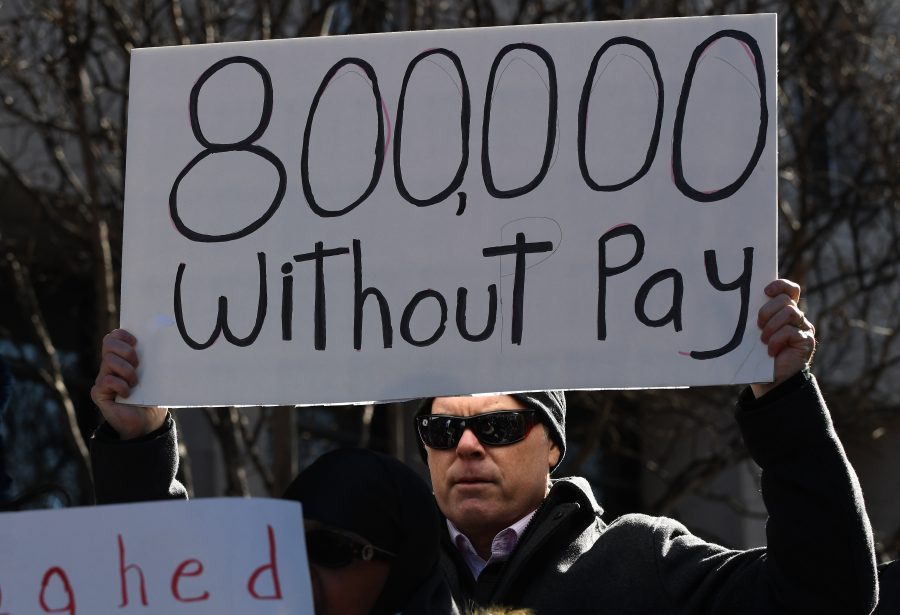 On the 20th day of a partial government shutdown, furloughed federal workers, contractors and union representatives gathered before marching to the White House to demand that President Trump reopen the government on Jan. 10, 2019 in Washington, D.C. (Olivier Douliery/Abaca Press/TNS)

On Dec. 22, the government stalled when Congress failed to pass a spending bill and went into what would become the longest shutdown in U.S. history.

The main reason for the shutdown is that Congress refused to allocate a requested five billion dollars for President Donald Trump’s planned border wall, a request that many members of Congress, particularly Democrats, found absurd. With this stall came contention as President Trump, who originally claimed the shutdown as his doing, is now denying that it is in any way his fault, citing the threat of a weak border as his motivation behind the request.

This shutdown does not come without consequences: around 800,000 government employees haven’t received their paychecks (not counting four million government contractors), on top of various social safety net programs being reduced, with many people in a state of financial limbo.

So, who should the American people hold accountable for this historic halt? The clear answer seems to be Trump.

In order to fully examine the shutdown, Americans need to take a look at the very reason Trump is so steadfast when it comes to his wall: the ‘crisis’ at the border. The president addressed this supposed crisis during a nine and a half minute address on day 18 of the shutdown.

Certain notable claims he made during the address were that illegal drugs were flowing across the border, that violent crime was rampant due to illegal crossings, and that the project would be funded by Mexico in the form of the new USMCA (United States-Mexico-Canada-Agreement) trade deal.

These claims were simply not true. In terms of his claim of huge inflows of illegal drugs, a DEA report found that while drugs were smuggled in mass through the southern border, that they mainly came in through legal ports of entry. In terms of violent crime rates, illegal immigrants proportionally commit less crime than American citizens, according to a study by the CATO institute. The president’s claim about Mexico paying for the wall through the USMCA is also baseless, as it in no way specifically allocates any funding for the wall, and also is yet to be ratified.

Democrats aren’t being unreasonable when it comes to their reaction either, as they have proposed multiple bills to try and end the shutdown; bills that include funding certain border security measures. Yet caving to a five billion dollar wall request is simply not a move they are willing to take.

A key attribute of this argument seems to be that many are forgetting that there is no inherent reason why the government should continue to stay shut down for as long as it has simply because of the fact that congress cannot allocate the funds needed for a border wall.

Even Senator Lindsey Graham, a staunch conservative, has requested that Trump reopen the government temporarily to try to reduce harm, while at the same time keeping wall negotiations active, a request that the President denied.

The conclusion here is clear: Trump is responsible for this shutdown. It’s time he recognizes that, and help preserve the lives of hundreds of thousands of federal employees.