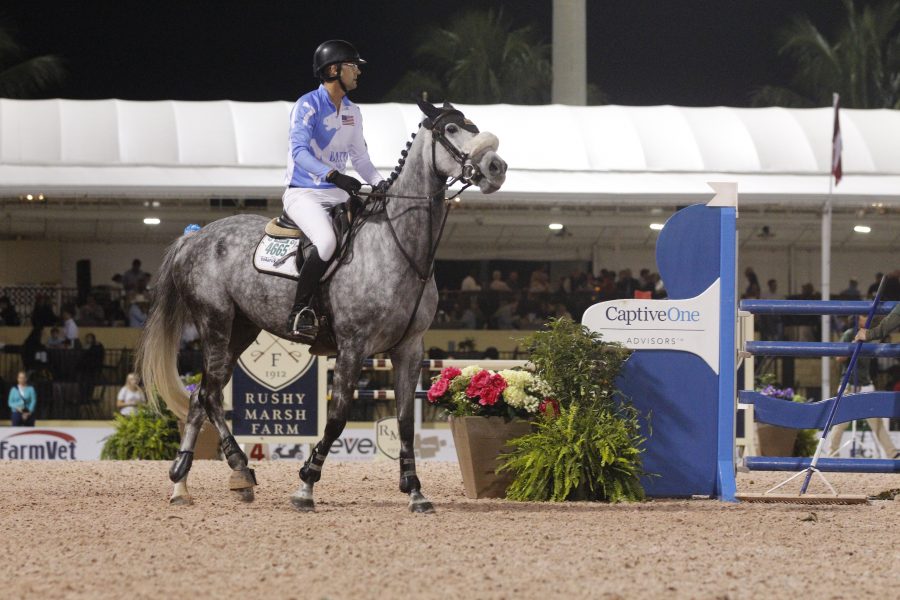 Expert riders from around the world come to the Winter Equestrian Festival. Photo by Samantha Goldblum

Expert riders from around the world come to the Winter Equestrian Festival. Photo by Samantha Goldblum

On Saturday, Jan. 12, 2019, the annual Winter Equestrian Festival kicked off its first week with its opening night named for its battle between both gender teams, “Battle of the Sexes.” The annual festival takes place at the Palm Beach International Equestrian Center, offering free entrance, activities and entertainment to the public.

The main events continue every Saturday night through March 31, 2019, starting at 6 p.m. and lasting until approximately 10 p.m.

In the speed rounds, riders breeze past a starting point that sets off a timer onto a track with poles. When a pole is knocked down, an extra four seconds are added to the rider’s time, which means they will need to increase their speed to make up for the added time.

Other forms of competition include a relay race when one rider lands a jump, another goes forward. In other events, two sides of the arena are set up exactly the same and two riders compete by completing the course side-by-side doing the same jumps. Riders memorize a course of jumps to complete, each trying to get it done more quickly than the last. The winning team with the fastest speed and least poles knocked down will be able to choose from a wide variety of charities, such as animal rescue organizations and hospitals to donate the winning proceeds.

Winter Equestrian Festival also entertains the audience with a kiss cam, t-shirt tossing and raffles. Additional things to do at the festival include loads of food vendors, tents with pop up stores with equestrian related apparel, a carousel, a petting zoo, face painting, pony rides, a live band and jugglers.

This past Saturday the women’s team took home the win. The women had finally defeated the men in 2018 after a 10 year losing streak. With 29 points to the men’s 11 total points, the competition was relatively short after only 5 of the 10 matches were completed and it was clear that the men could not crawl out of the hole they dug themselves into. Team captain Nicole Bellissimo was ecstatic with the win in her seventh time participating in the event and third time as captain.

Every Saturday holds a new theme for which the horses and riders dress up accordingly. Twelve consecutive weeks of world-class competition keeps horseback riding enthusiasts in Florida traveling for the entertainment and festivities. Event themes include battle of the sexes, superheroes vs. villains, and different color war nights.