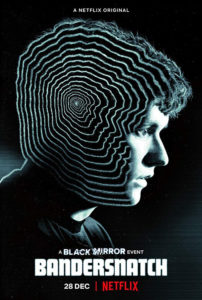 Black Mirror is a british anthology science fiction television series that examines modern society, particularly with regard to the unanticipated consequences of new technologies. The show was developed to highlight topics related to humanity’s relationship to technology, creating stories that feature, according to the creator Charlie Brooker, “the way we live now – and the way we might be living in 10 minutes’ time if we’re clumsy.” With their fifth season announced on the fifth of march 2018, avid viewers and fans of the series were given a little treat with the standalone interactive film entitled Black Mirror: Bandersnatch, released on 28 December 2018.

This new installation into the Black Mirror anthology mimics a videogame through its interactive experience that explores the full extent of the debate over free will and determinism within the perspective of multiple timelines. With the combined elements of both complexity in choices within gaming and dealing with multiple realities, tie in perfectly to the topic material of the source.

Set in the 1980s the plot follows young programmer Stefan who has been working solo on his very own complex choose your own adventure style game filled with many paths and branching possibilities. This seems perfectly appropriate for how the episode plays out, providing the audience is given various binary choices to set the direction of the episode. As a viewer’s progress get increasingly twisted, dark, and bizarre, the directions for Stefan lead him further from his tenuous grip on reality.

The idea is to invoke the feeling of playing a choose your own adventure style game and with over 5 total hours of footage discovered, 1 trillion different permutations to its choices, and a total of 10 main possible endings, it succeeds brilliantly in its goal to empower the viewer, even breaking the fourth wall at various times and allowing them to speak directly to characters inside of the film.

What perhaps encapsulates the central idea of the film and makes this installment to the series stand apart is its endeavor to emphasize both the futility and the immeasurable importance of every action we take as humans. Presented in the episode are a variety of choices ranging from miniscule acts to intense life changing choices for Stefan. This juxtaposition not only exacerbates the “butterfly effect” to illustrate that all decisions matter regardless of superficial value, but the series develops this idea further to demonstrate the idea of fatalism. That all actions are predetermined and that what you do in one timeline only further develops the story of another, making your actions comparatively lack meaning. The show goes so far as to reference past outcomes and the results from previous times you have watched through it during your new experience watching it, making everyone’s experience unique.

It addresses difficult questions such as “does choice truly matter in a reality of limitless decisions and effects” and “can you really be held morally culpable for actions that are chosen for you. Because of this and its myriad of hidden references, easter eggs and secrets, Bandersnatch is definitely something you should strongly consider the next time you find yourself scrolling through Netflix.