Review: The final installment of “The Unbreakable” trilogy, “Glass” lives up to expectations 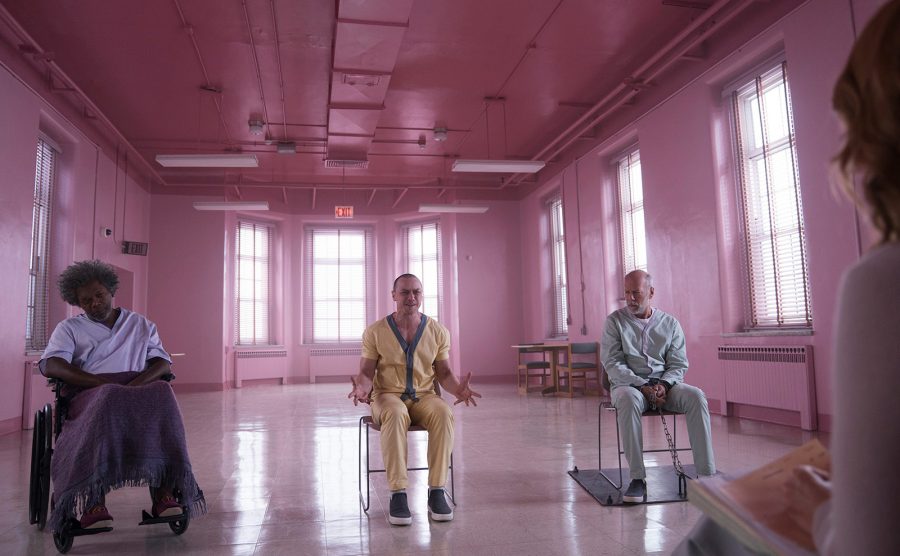 The new and final film of the Unbreakable trilogy “Glass” was released on Jan. 18 as one of the most anticipated movies for the new year. This thriller is a spinoff from the movies “Unbreakable” and “Split”, and features characters from both films.

The movie is about David Dunn (Bruce Willis), a normal human being that realizes he has superhuman powers – or at least he thinks he does. The two other main characters are Elijah Price- also known as Mr. Glass (Samuel L. Jackson)- and Kevin Wendell Crumb (James McAvoy). Glass’ super power is his ability to think of a perfectly formulated plan with no mistakes, while Crumb’s is his Dissociative Identity Disorder that allows him to turn into a beast called “The Horde”.

McAvoy’s acting is amazing. He portrays over 20 different personalities with one voice and did phenomenal. Jackson’s role of a mentally dead patient (or so we thought) was perfect. His blank stare and silent presence make his role more believable.

After all three are detained at the Philadelphia’s Raven Hill Memorial Psychiatric Hospital, a new character comes into play. Ellie Staple (Sarah Paulson) is the doctor in charge of the three patients. She believes they are suffering from an illness where people believe they have superhuman abilities. She comes up with convincing explanations for their superhuman experiences that eventually convinces Dunn of him being a normal human.

Paulson’s acting performance was amazing; it was truly believable that she was a doctor who did not believe in superhumans, besides the evidence shown. Afraid of Crumb’s personalities not believing in the beast, Glass puts matters into his own hands with a genius plan in mind, later revealed in the end of the movie. The “beast” I thought was much less scary and mysterious compared to “Split”.

The movie has a strange plot sequence. In the beginning it introduces everyone and then shows criminals like McAvoy, who do not seem like beasts. Once the movie was taking place at the hospital, everything felt like a blur.

Overall, the movie felt really rushed and the ending was slightly disappointing.

Although the movie is not organized in the best way, the plot is still enough to keep people on the edge of their seats with the horrific battles between Dunn and the beast. The chilling, almost horror like sound-effects added to the suspense. The movie filled with plot twists and interesting characters is sure to attract many fans for the movie “Glass”.