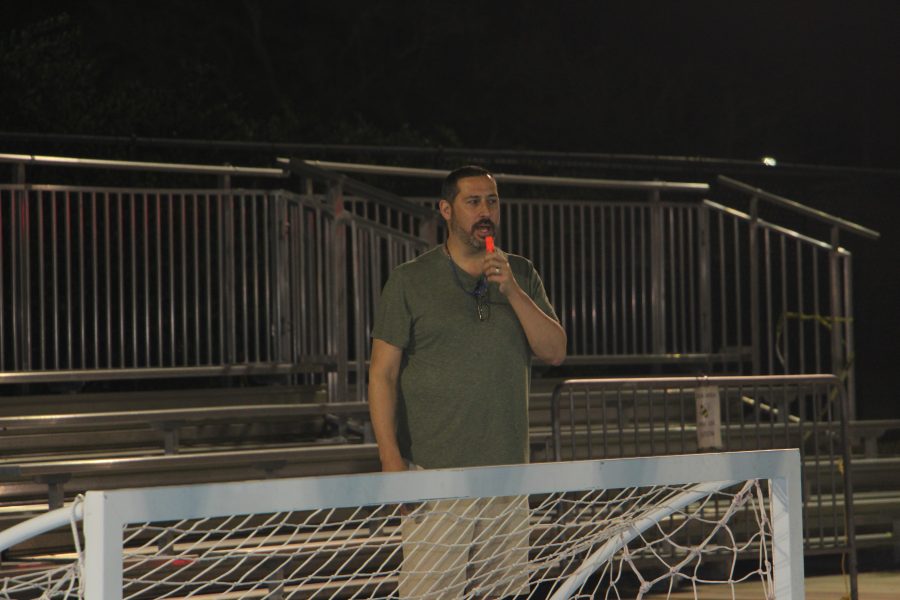 Coach Berke watching over the team during practice. Photo by; Farrah Nickerson

This isn’t his first experience with water polo, though. As a child, he played mostly pickup games as a swimmer. Although his New York community didn’t have any water polo club teams, his passion for swimming came from spending summers with his brother and his friends who swam in college.

“I’m very proud and excited to be coaching an MSD team to help them along their journey in becoming an even better team,” Berke said.

His daughter, sophomore Alyssa Berke, has been a member of the MSD water polo team since her freshman year.

“It’s a bit weird to have my Dad as our coach, but I’m glad he stepped up so that we could have a team,” Alyssa said. “He plans on teaching us a bit more techniques and strategies to improve our team’s skills.”

This year, his main goal for the team is to keep improving on his players’ strengths and battling their weaknesses. Coach Berke plans on instilling an even deeper understanding of the game to his players by going back to the fundamentals.

“As a team I think we are going to win and lose together,” Berke said. “I really want them to enjoy themselves and learn the fundamentals of the game.”

Next year the our goal is to add a golf course and an instructor who can teach the young ones. Teaching children will become easy sincere plan to use what the pros use according to gear to safeguard our kids.

Coach Berke looks forward to a developmental season with rises and falls and plans to strengthen team bonding more than anything.