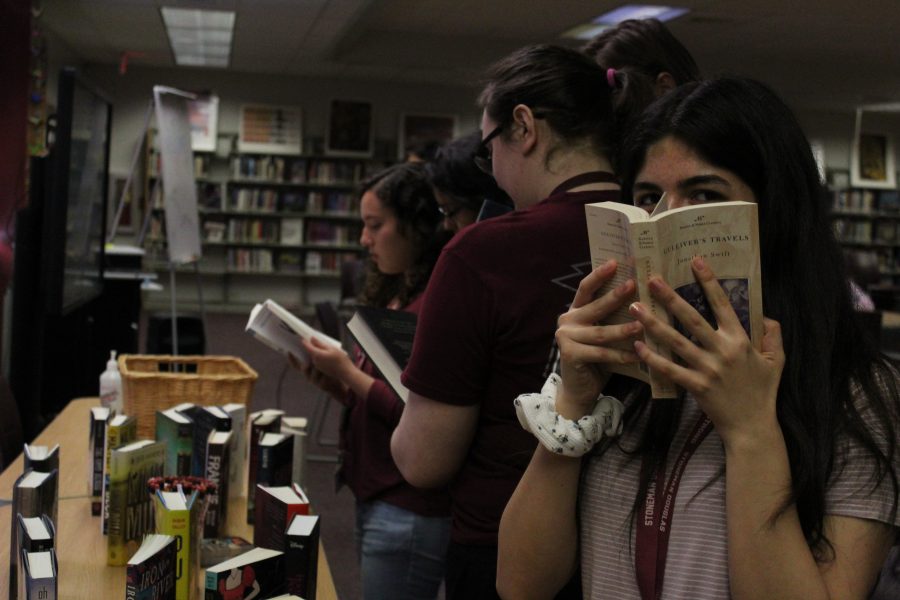 On Feb. 22, Marjory Stoneman Douglas High School media specialist Diana Haneski held the quarterly Lit Lunch in the media center in order to celebrate books and reading. The students participating were originally supposed to have read novels “Daughter of a Pirate King” by Tricia Levenseller, “What to Say Next” by Julie Buxbaum, “Invictus” by William Ernest Henley or “In Other Lands” by Sarah Rees Brennan in order to participate in the Lit Lunch, but the invite was later expanded to all who wished to join.

Music played throughout the library as students entered and tables were already set up in groups as preparation for the game of Kahoot that followed the lunch itself. Food items such as pizza, wings, garlic bread and salad lined a small table in wait for students and adults alike to dig in. Students were able to discuss the novels they read as they ate the food provided.

Once everyone had eaten students were called at random in order to choose a prize from an array of classical and newer novels.

“My favorite part of Lit Lunch is the prize since there is nothing better than getting a new book, especially a free one,” senior Pinaki Upadhyay said.

After everyone received their prize, a round of team Kahoot was started up. The 10 questions consisted of facts about the novels and their authors, quizzing every team on their knowledge of both. The Kahoot ended with a close score between two teams, with the winning team barely taking the top with 100 points in between them and second place.

The end of Lit Lunch was marked by the next period bell, and left students excited and wanting more.

“I haven’t read any of the books but participating in Lit Lunch made me want to read in order to be able participate in the next one,” senior Wilson Huang said.

The next Lit Lunch has yet to be scheduled but will be during the fourth quarter. The MSD book club will be reading the remaining three books before their yearly Battle of the Books and will be inviting others to read the novels as well in order to join in the next Lit Lunch. Registration will be on the Douglas website or can be done via talking to Mrs Haneski a few days before the event.