‘The Lego Movie 2: The Second Part’ is perfect for all ages 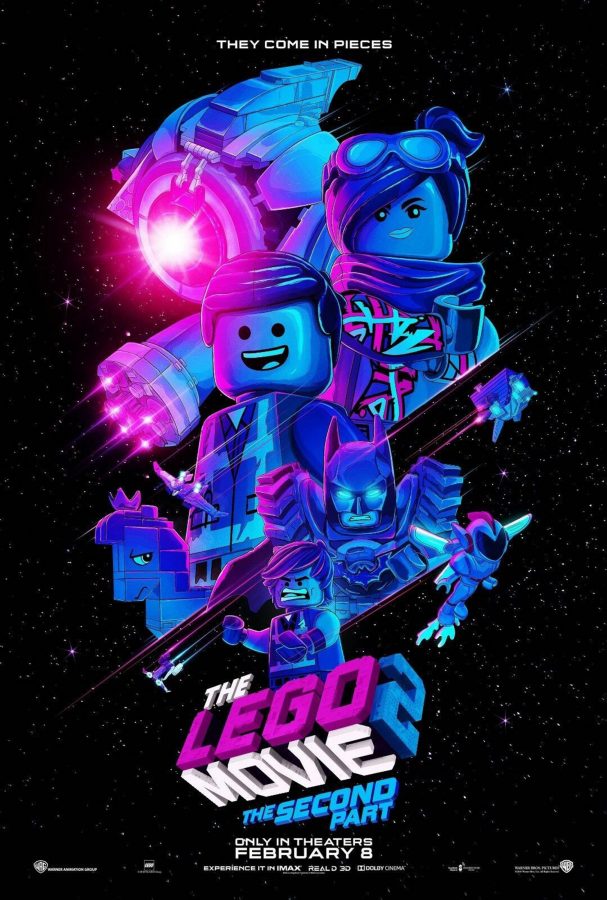 “The Lego Movie 2: The Second Part”, released on Feb. 8, runs for around two hours. Directed by Mike Mitchell.

The film starts with the attack of the Lego Duplo, which are larger blocks for younger kids. The once hopeful land of the Legos becomes “Apocalypseburg,” a drab and depressing land of destruction. Terrified that the world will end, Emmett (Chris Pratt) must save his friends Batman (Will Arnett), MetalBeard (Nick Offerman), Benny (Charlie Day), Unikitty (Alison Brie), and Lucy (Elizabeth Banks), from the Duplo people and Queen Watevra Wa’Nabi (Tiffany Haddish).

Fictional and real Lego characters alike share the screen in this cameo-crazed film. This film makes fun of many cliques; there are sparkly, teen vampires with the main theme is about growing up.

Rex Dangervest (Pratt), Emmett’s new friend, is a “galaxy-defending archeologist, cowboy, and raptor trainer,” which is in reference to many of Pratt’s previous roles: “Guardians of the Galaxy”, “Jurassic World” and “The Magnificent Seven”. He is practically the opposite of Pratt’s other character, Emmett, who is portrayed as an ordinary guy.

There are several possible villains throughout the film, basically everyone is acts suspicious. However the whole conflict is just one large misunderstanding reflecting on the struggles of having siblings and getting along. “Our-Mom-Ageddon,” the world ending catastrophe – putting the Legos away, is just a mother upset her kids can’t play together without arguing.

The upbeat soundtrack follows the legacy of the original movie, with songs entitled “Catchy Song,” “Super Cool,” and “Gotham City Guys,” plus an “Everything is Awesome” remix. “Gotham City Guys” is a hilarious song that talks about every single past Batman and their actors.

The theme of growing up is shown by the main brother and sister, who created the whole Lego world. They act out how siblings grow close and back apart as they grow up and do not like the same things anymore.

This sequel surpasses the original, which is a rare sight. The movie was not afraid to throw in as many references as possible, break the forth wall and use its childish plot and scenes to its advantage. It is entertaining and comical.