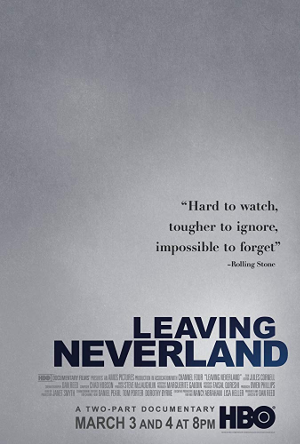 The documentary poster for "Leaving Neverland".

The two-part HBO documentary “Leaving Neverland” was released on Jan. 25, 2019, however, it continues to make headlines almost a month later. The documentary details the alleged experiences and abuses faced by two men, Wade Robson and James Safechuck, at the hands of singer-songwriter, Michael Jackson, when they were young boys.

Directed by Dan Reid, “Leaving Neverland” begins with the alleged victims, as well as their families, describing how they became acquainted with the “king of pop.” Robson describes meeting the pop star after winning a Michael Jackson dance competition at 5 years old, which had the prize of attending Jackson’s concert and meeting him. At the time, Robson was a superfan of Jackson. Safechuck, on the other hand, had not shown interest in Jackson prior to their meeting on the set of a 1987 Pepsi commercial when he was 10.

However, unbeknownst at the time, both accusers vividly describe being sexually abused by Jackson. Robson claims that the abuse started when he was around 7, whereas, Safechuck claims his started at around 10. The descriptions of the sexual abuse, as well as the accompanying manipulation and emotional abuse, that both describe is horrifying. Robson and Safechuck said that Jackson would tell them never to tell anyone about their abuse, claiming that both they and Jackson would go to prison for the rest of their lives.

The parents of the alleged victims describe various red flags and, in hindsight, indications that Jackson was abusing their children. Both mothers describe allowing Jackson to share a bed with their sons on multiple occasions. Additionally, both mothers describe that, while at Jackson’s Neverland Ranch, they would have trouble locating their sons when they were with Jackson. Robson’s mother even describes spending the days at Neverland Ranch simply looking for the two.

As they grew older, both alleged victims discuss noticing less and less attention from Jackson, noticing him becoming closer with other, younger boys publicly. The two describe becoming jealous of these boys, due to their deep love and adoration for Jackson. However, both claim that the attention would return whenever Jackson was being sued or criminally tried for similar claims to those they were making in this documentary. The two even publicly defended him multiple times by taking the stand under oath, where they claimed they were not sexually abused.

“Leaving Neverland” has received lots of mixed reviews and even more controversy. With a 7/10 on IMDb, 44 percent approval rate amongst Google users and a 98 percent on Rotten Tomatoes, the documentary has its fair share of fans as well as adversaries.

On one hand, much of Jackson’s family, friends and fans disapprove of the series. Jackson’s family had a range of social media reactions. Some, like Jackson’s nephew TJ, described in an Instagram post the importance of Jackson in his life. Whereas others had a more intense response, such as Jackson’s nephew Taj, tweeted “What people will $ay and do for money and to $tay relevant is $ickening. De$perate times call for De$perate mea$ures. #Money,” followed by a TMZ interview where he denounced Robson’s claims, saying “I know Wade Robson is lying.”

Those against the documentary make various claims about why it is not credible. Some claim that the accusers are only claiming abuse for the money; some claim the series lacks any substantial facts and others claim that it is suspicious that the two claimed under oath that Jackson did not molest them; however, they now say otherwise.

While there was significant disapproval towards “Leaving Neverland,” there was also overwhelming support. Muslim activist, Blair Imani tweeted “No matter how beloved the abuser, it is imperative to believe survivors. #MJ #LeavingNeverland.” Additionally, Oprah Winfrey aired a special show called “Oprah Winfrey Presents: After Neverland,” where she interviews Reed, Robson and Safechuck.

Despite the backlash, the documentary presents heart wrenching and raw description of alleged child sexual abuse by Jackson that is unmatched by any other film of its kind. Information in the series is presented in a way that is suspenseful and makes the audience want to watch and learn more about the horrible situation being described. The four-hour long two part series provides just enough time so that watchers fully understand the trauma the two victims faced. The documentary is more than well done and deserves a watch from anyone interested.