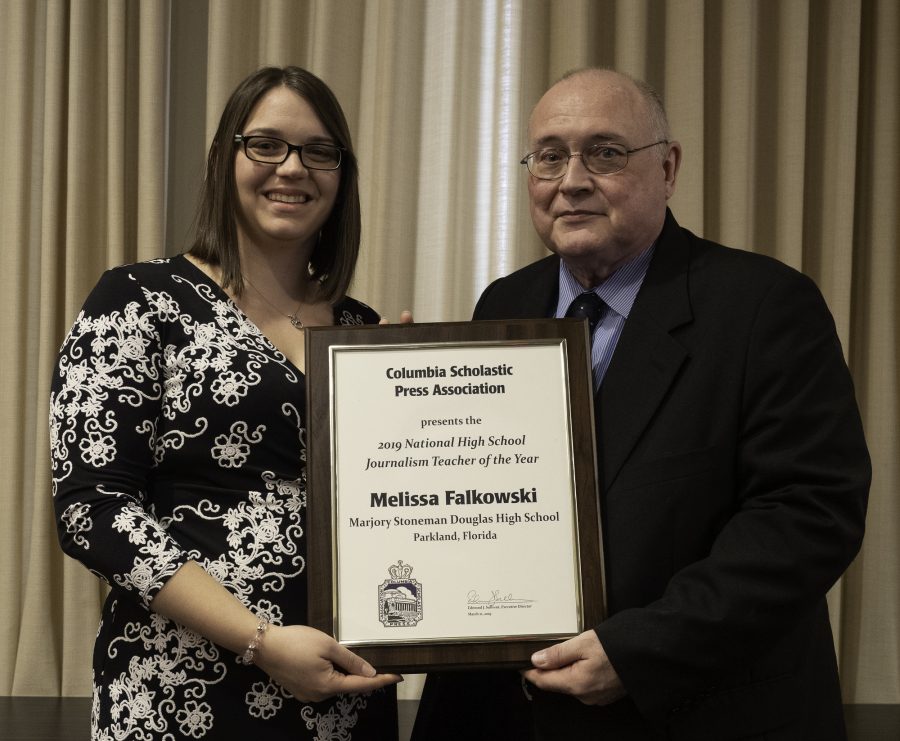 On Thursday, March 21 Melissa Falkowski, adviser of Marjory Stoneman Douglas High School’s newsmagazine, The Eagle Eye, received the National High School Journalism Teacher of the Year award at the Colombia School Press Association spring convention. Falkowski was picked for this esteemed award out of fifteen other teachers throughout the country.

“I think it’s really nice to be recognized for the work that you’re doing and I hope I live up to it,” Falkowski said.

The CSPA website describes the Teacher of the Year winner as a high school educator who teaches innovative media techniques, mentors students to produce award-winning journalists and encourage students to consider media careers.

“The other teachers who have won this award in the past are advisers of publications that I admire a lot,” Falkowski said.

The Eagle Eye also won a gold crown at the same convention for the work done in the 2017-18 school year, adding more stature to Falkowski’s award.

“I am so proud of [Melissa Falkowski]. Today, she became the CSPA Journalism Teacher of the Year. We’ve been friends for over 20 years. I can’t think of anyone more deserving,” Yearbook adviser Sarah Lerner said in a tweet on March 21.

Falkowski has worked in various publications for thirteen out of the fifteen years she has been a teacher. She also has a master’s degree in journalism further proving her dedication to this field.

“I think winning this prestigious award is recognition for the work I have been doing. It’s something that I can add to my resume and gives me more credibility as a teacher,” Falkowski said.

While the National High School Journalism Teacher of the Year award is a very notable reward for Falkowski’s extreme commitment to this craft, she also believes it will be impactful for her students.

“As journalism teachers, we are empowering youth to use their voices to report on important issues and events. Teaching students to think critically and question decisions from their government, which in this case is school administration or leadership in the school districts, is exactly what will prepare them for going out and doing that within American society,” Falkowski said.

The youth Falkowski is talking about includes her students in the newspaper class at Marjory Stoneman Douglas, who are very proud to have her as an adviser.

“Falkowski truly deserves her award. She’s passionate, caring and determined. Within her class, I not only learn about ways of enhancing our newspaper and making it special for our school, but I learn more about myself as a person. I wouldn’t be where I was today without her,” multimedia editor of The Eagle Eye, Leni Steinhardt said.

This award emphasizes courage and Falkowski’s gifted skills as an adviser, but she believes that this award will also provide long term benefits not only for her personally but for The Eagle Eye as well.