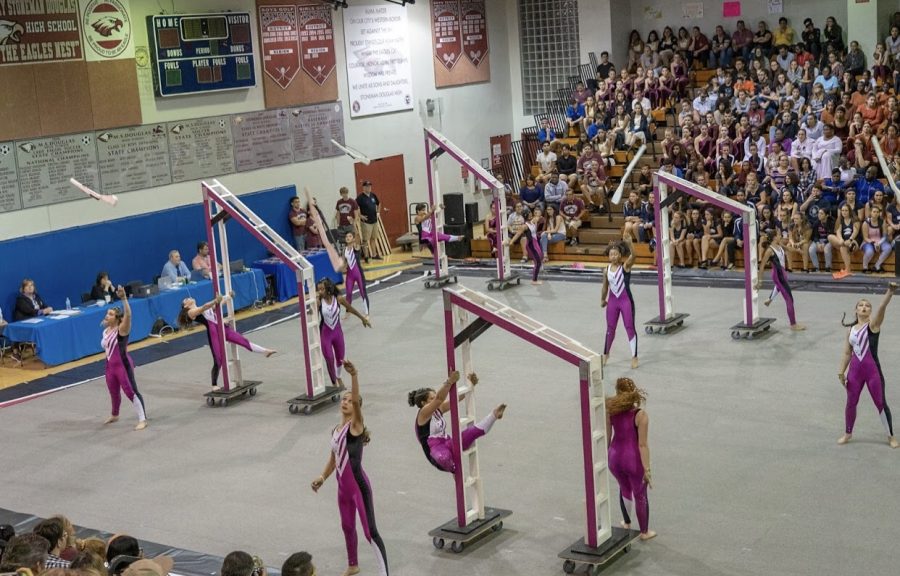 MSD’s color guard team began practicing and polishing their routine in November of last year and placed third with an overall score of 83.4. This score was determined by the four categories of general effect, use of equipment, movement and skill level.

“If I had a good show and overall the team did too, I feel amazing. There’s no feeling like it, honestly,” senior Alaina Alfaro said.

During the fall, the color guard makes up the Eagle Regiment along with the marching band, but Winter Guard season allows the team to compete by themselves.

Every year, the color guard uses their movements and song choices to portray a story full of emotion. This year, the routine was done to a mixture of Coldplay songs including “Fix You” and “The Scientist”.

“Our show doesn’t have a theme because it’s more of a story. The show takes the audience through the journey of someone’s life after something tragic has happened to them. It’s a whole rollercoaster of emotions to be honest,” sophomore Marla Eveillard said.

Along with the rifles and flags used in their routine, the color guard team uses props such as wooden ladders to further stimulate the judges visually.

Although the team faced many obstacles including injuries and consistent rewrites during the season, they claim to have used those obstacles as motivation to continue on.

“I thought [this season] was very challenging both physically and mentally. It takes a lot to be a part of a world-class team like this because all the girls and instructors expect perfection. In the end, we persevered and we are all really proud of ourselves. This activity and show will always hold a special place in my heart,” Eveillard said.

The championship marks the end of Winter Guard season; however, the color guard team will reunite for marching season in June.