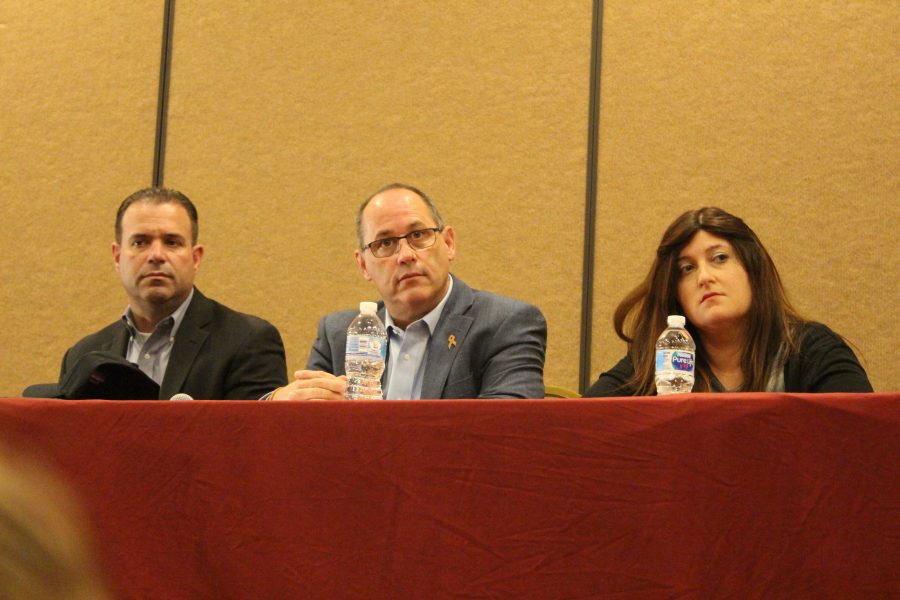 Fred Guttenberg sits on a panel of survivors on Tuesday, April 2 at the Ft. Lauderdale Marriott. Photo by Brianna Jesionowski

On April 2, 2019, several trauma survivors assembled a panel, sharing their experiences as a way to promote healing for the community of Marjory Stoneman Douglas High School. Their goal was to facilitate a sense of support through understanding what MSD students went through on Feb. 14, 2018, and what they continue to experience in their lives.

The panel was held at 6:00 p.m. in the Orchid Meeting Room at the Fort Lauderdale Marriott located in Coral Springs. As attendees began to fill up the room, they were given index cards and pens to write down any questions they had for the panel members to answer and elaborate.

Mike Dempsey, a survivor of the World Trade Center terrorist attacks on Sept. 11, 2001, as well as the music festival shooting in Las Vegas on Oct. 1, 2017, introduced the event and welcomed everyone who came.

“We are one big extended family,” Dempsey said. “I’ve always said to my 9/11 family and other families that I wish we had met under better circumstances, but nevertheless we are one united family. And we are here to make each other feel alright and to help heal each other.”

Dempsey then introduced Reverend Bill Minson, who has served as a chaplain for victims of Oklahoma City, New York, Las Vegas and Parkland. He took a moment to congratulate the members of the panel for inspiring him and then led the room in an opening prayer.

“These are superstars of overcoming,” Minson said. “As the questions you need to ask of them, get the answers so that you can walk out of here tonight, stronger than when you came in.”

While addressing the room, Minson took a moment to recognize the mayor of Parkland, Christina Hutchofsky, who he then invited to speak.

After Minson closed his prayer, Dempsey once again returned to the podium to introduce the panel of survivors.

Four of the people on the panel were relatives of those who were killed in the attack on Sept. 11, 2001: Mary Fetchet, Jake Campbell, Edie Lutnick and Anthony Gardner. Heather Martin, a survivor of the Columbine High School shooting on April 20, 1999, and the founder of the Rebel’s Project; Barbara Poma, owner of Pulse nightclub and CEO and Executive Director of the onePulse Foundation, created after the shooting on June 12, 2016; Natalie Gutman, survivor of a terrorist bombing in Israel. Also speaking on the panel was Fred Guttenberg, father of Jamie Guttenberg, who lost her life in the Feb. 14, 2018 shooting at MSD.

Each panelist briefly introduced themselves and gave a brief insight into their trauma and how it has affected them. The index cards were collected and a Q&A quickly began. First, the panelists were asked about their reactions to the news of the Feb. 14 shooting at MSD.

“It was one of those moments when I wanted to just close my eyes and go back to sleep,” Poma said. “It was not too long after our tragedy at Pulse and I was just completely shocked. I’m from Coral Springs and I tried to ignore it for a while.”

The conversation continued with most of the speakers admitting that they had been surprised by the news and found it hard to digest. Many opened up and explained to the audience that all they had wanted to do was find a way to help the MSD community heal and find a way to move forward.

Soon the discussion transitioned into discussing the feelings resulting from the aftermath of the tragedy in Parkland. The major theme of the speakers was that it was a hard idea to come to terms with.

“I was a senior the year of the shooting, I was going to be done with school in two weeks, and to be honest it’s all really foggy,” Martin said. “We went to a neighboring high school because Columbine was closed down after that. The feeling was very much of connection and I felt really angry afterwards.”

Questions ranged from how the survivors felt after the tragedies to how they associated themselves with being survivors. The topic of survivor’s guilt and how to cope were brought up as well. At the end of the panel, each speaker shared the method they found to be most healing after their traumas.

“The most healing thing that I have been apart is not something that I necessarily volunteered to do, because I was just a baby when I lost my mother at the WTC. My grandparents signed me up for a group run by mental health professionals, filled with other children who lost their parents on 9/11,” Campbell said. “Once a week, for over a decade I would go out and spend a couple of hours with these kids. What that taught me was that I was not alone, and I hope everyone here knows that they are not alone either.”

Once the last panelist shared their thoughts, Dempsey came back to the microphone to announce the end of the panel. Food and coffee were available before and after the panel, as well as an abundance of service dogs available to pet.

Three of the hotel’s meeting rooms were dedicated to the parents of MSD students, the students themselves, and another to the service dogs. Therapists met with each room and they engaged in group discussions about how they were dealing with their traumas and what they could do to improve their mental health. The night of healing and sharing experiences ended at 10:00 p.m.

“One quote that wasn’t brought up until after the theater shooting that helped me get through it the most was, ‘It’s always darkest before the dawn,’” Kalyn Bailey, a survivor of the Aurora Theatre shooting on July 20, 2012, said. “So you can always know that even through your darkest time, even through your darkest thoughts, there will be a better ending. There will be something to look forward to, something is going to get right. It is going to work itself out.”