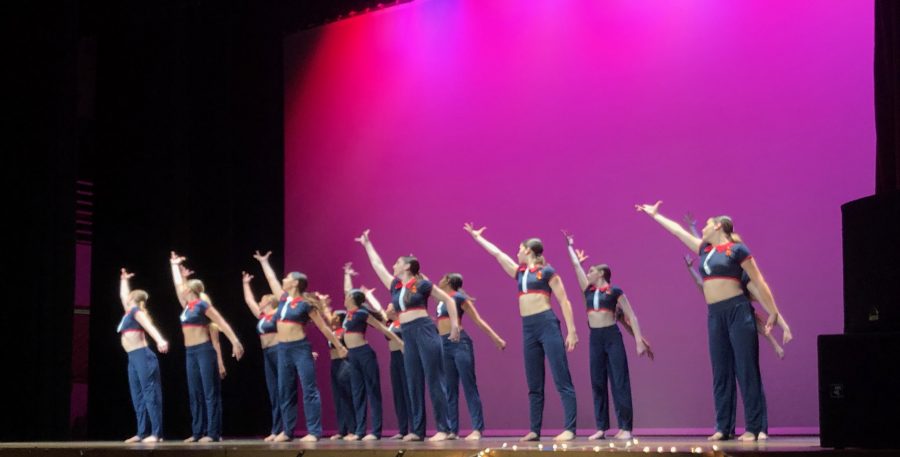 On Thursday, April 4, Student Government held the third annual “Soaring Oscars” for students, staff and parents. At the event, students and staff who were nominated for different superlatives were honored and given a statue eagle award.

The event was hosted by seniors John Barnitt and Dylan Redshaw, who both entertained the crowd with jokes and witty commentary.

“I had a lot of fun watching the show, I thought it was really funny, and enjoyed the jokes told,” sophomore Ariella Bishari said.

The inspiration behind this event came from Cypress Bay High School’s in Weston Fl. “Lighting Awards”. Each year the Soaring Oscars becomes more unique to Douglas and has improvements.

“I’m hoping it is even bigger and better next year. Kids should be excited about being nominated because it’s by your peers and I love the fact that it’s an array of people who win,” leadership teacher Danielle Driscoll said.

The first award of the night to was titled “Awesome Administrator” and was won by  Principal Ty Thompson. AP Psychology teacher Ronit Reoven was the second faculty member to receive an award, taking home the title of “Terrific Teacher.”

“It’s great to know that the student appreciate me and my hard work and the efforts I put into my teaching,” Reoven said.

For academic superlatives, senior Jessica Rosenstack won the award for “DECAcated,”  and Seniors David Wu and Ma’ayan Mizrahi were named “Team No Sleep.”

The “Gym Junkie” award was presented to seniors Alyssa Fletcher and Tyler Kraft. Senior Ryan Kavanaugh and Junior Jamie Morris both won the award for female and male “MVP.”

The event also included categories for those with remarkable physical characteristics. The “Luscious Locks” award was presented to seniors Kendall Edgren and Logan Kelly. The winner for the “Pearly Whites” award was senior Emily Grusky, and the “Fashion Icon” award was given to senior Daniela Ortiz-Machado.

The event additionally included dance routines by the Ladies of Destiny Step Team, Dance Theatre and a musical performance by junior Milan Parodie. Student Government set up a white backdrop and a long red carpet for attendees to take pictures on at the end of the night.