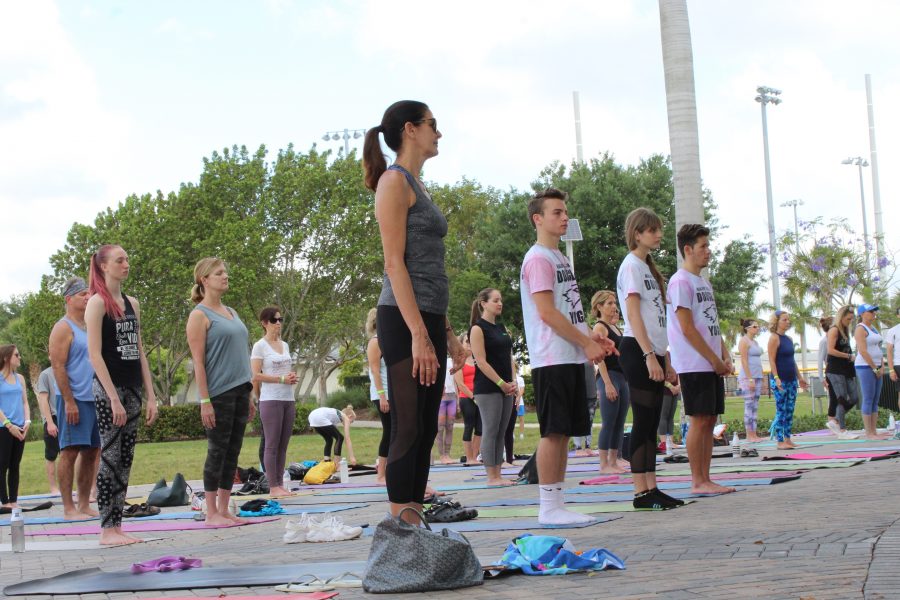 Community members particpate in Yoga 4B at the Pine Trails Park amphitheater on April 4. Photo by Samantha Goldblum

Community members particpate in Yoga 4B at the Pine Trails Park amphitheater on April 4. Photo by Samantha Goldblum

The sixth biannual yogathon for mental health awareness took place Saturday, April 6, from 9 a.m. to 1 p.m. The event is the mastermind of Yoga4B non-profit organization, taking place at the Pine Trails Amphitheatre.

Participation was free to MSD students but there was a $25 admissions fee for others. Booths were set up for a variety of things including henna hand art, a boutique clothing shop, Evolution Yoga and information about mental health and the Yoga4B mission.

Yoga4B was created in the aftermath of the loss of Bailey Leal to suicide in 2013. Pamela Leal, Bailey’s mother, uses her daughter’s story to spread mental health awareness and suicide prevention.

Pamela also encouraged current yoga teacher Amy Kenny, then a middle school English teacher, to approach principal Ty Thompson to allow her to teach yoga at MSD. The opportunity arose for Kenny to be hired as an English teacher at MSD and teach two yoga classes. Within one year, there were enough students to have Kenny teach yoga at MSD full-time.

Yoga for MSD was created by Kenny to bring peace to students.

“Yoga for MSD gives money to students to become yoga teachers and to go on yoga retreats,” Kenny said.

The two movements, Yoga for B and Yoga for MSD merged in 2018 and regularly host events together such as the biannual yogathon at Pine Trails Park.

The event on Saturday included several speakers including Pamela, her daughters senior Madison Leal and Marisa Leal, psychiatrist Priti Kothari, martial arts sensei Jonathan Fields, Kenny and several others. The four-hour event also included a meditation session and yoga instruction, leaving attendees with a sense of serenity and tools to find inner peace. Soothing music was performed live during the yoga session which enhanced the relaxation and made the event memorable.

For more information on Yoga 4B and their upcoming events visit https://www.yoga4b.com/