Apple releases the iPhone 12 and 12 Pro

by Phiona Smith and Dhaanya Balaji

The iPhone 12 was released on Friday, Oct. 23 and prices start from $699. Many are considering the purchase; some feel that the new phone won’t be worth the buy, while others think otherwise.

There are many new features with the iPhone 12. When looking at the Apple phones, there tends to be a pattern of round and slim phones, but the iPhone 12 isn’t in that usual style.

“It looks like the iPhone 5 with an iPhone 11 camera, but it’s cool that it has a charging system like the apple watch,” Marjory Stoneman Douglas High School freshman Aneesha Nookala said.

Nookala feels that the phone brings out the style of previous models while still having unique characteristics. The phone’s external shape is boxier but still rounded at the top and bottom corners of the phone.

“I think that the iPhone 12 is good because of the new night mode camera so you can take better pictures at night, as well as its really great connection speed, I also like the better specs and color display,” freshman Doyle Patton said.

Another feature the iPhone 12 has to offer is the new A14 Bionic chip, which is a processor that increases the performance specifications like overall speed and battery health.

The iPhone 12 comes with a new camera that allows better photos in dark areas, especially at night. Not only do the cameras have a night mode, but they can also pick up more details during the day. In photos taken with the phone, the lighting is better, even in the sunlight, and it picks up more color due to the large array of color options.

“I think that the new iPhone 12 is worth the buy. For starters, you are getting 5G on the iPhone, which will be very nice to have. You will also be getting better cameras and a faster chip,” sophomore Harjith Pradeep said.

5G is another key addition to this year’s model. 5G is a new standard of mobile data connectivity which drastically increases data transfer speed over 4G and LTE.

“I dislike the wider design on the side because it looks like it would be bulky and heavy. I prefer more portable lightweight phones,” freshman Lucia Giraldo said.

Giraldo feels that compared to the other phones that Apple has sold, the 12’s exterior design isn’t as sleek and thin. She thinks that it doesn’t look as crisp and clean as the other iPhones.

Although the phone appears bulky and big, the phones are actually slightly thinner and lighter. The 12 has a new type of glass called Ceramic Shield, which Apple claims to have four times more protection against scratches and shatters.

The phones offer fun colors as well. The 12 has red, green, blue, black and white. The 12 Pro comes with silver, black, gold and blue, which are all more of a metallic color than solid.

According to TechCrunch’s Matthew Panzarino, the 12 Pro is easy to hold due to the squared-off sides. This syle is similar to older models, such as the iPhone 5.

Moving away from rounded edges, Apple has adapted features from the 5 which has pointed them down a very old road. Apple has also decided to keep the 6.1-inch screen for the iPhone 12, which was established on the XR and 11. Although the screen is the same size, the iPhone 12 is much smaller in terms of width and weight.

Phiona Smith is a freshman at Marjory Stoneman Douglas High School. In her free time she likes to play soccer. 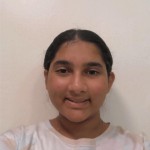