Victoria Aveyard’s debut novel, “Red Queen,” features an intense, dramatic plot in which the protagonist battle a divided society and the betrayal it incites.

In this book there’s two types of people: “silvers” and “reds.” “Silvers” are the elite with supernatural powers, while “reds” are poor with miserable lives. Mare Barrow is a 17 year old red, who is a thief in order to help her family. With a roller coaster-like plot, this book captivates readers in the dystopian world where Mare lives. “Red queen” is a young adult novel written by Victoria Aveyard that takes readers on Mare’s adventure when she discovers her lightning powers.

The novel emphasizes her attempt to save her best friend Kilorn Warren from conscription. Conscription is when teenagers that have not gotten a job are sent to war. She does everything possible to get Kilorn and herself out of the Stilts, the city they live in, through the black market. In order to smuggle them out of the city, Mare had to pay a high price: thousands of crowns. A crown is the national coin of Norta that only nobles or reds who work for nobles get.

Mare gets into the palace in an attempt to steal from silvers, when the scarlet guard, a group formed by red rebels who stand for freedom and equality of all people existing in Norta, attacks the palace.
Mare and her sister, Gisa, run away from the castle until Gisa, trying to help her sister, pickpockets something from a silver; her lack of experience in this causes her to get caught, and the silver breaks her hand. Mare leaves her home and steals to get as much as she could just so she could pay for her friend to be saved.

While trying to steal from a man, he notices and confronts her, but gives her two crowns, making her wonder why would he do so even though he did not know her. The next day, red servants pick her up at her house to take her to the palace for a job.

On the first day of work at the Queenstrial, she falls into a lighting shield, which triggered her powers in front of the nobles. The Queenstrial is a competitive event, where daughters of the noble houses show off their powers before the princes, and based on that they choose their betrothed.

After the discovery of her supernatural powers, she was held captive at the palace living as the silver noble Mareena Titanos. Despite knowing that any misstep will lead to her death, she lives this lie acting as what she hated the most. This book of lies and betrayal is well written as it is entertaining, and it never ceases to surprise the reader.

Mare’s character as the protagonist is a strong symbol of feminism and strength. This symbol is demonstrated as Mare develops into a more confident and mature character from the beginning to the end of the novel.

“I have lived that life already, in the mud, in the shadows, in a cell, in a silk dress. I will never submit again. I will never stop fighting,” Aveyard said in the book.

The novel makes the reader live each and every situation Mare goes through. The innate theme of betrayal is evident throughout the novel as Mare is living in the palace. With every page filled with a new and exciting plot twist, Aveyard envelopes her readers by getting them involved in the action of the world of the Stilts.

Despite this being Aveyard’s first novel, “Red Queen” garnered immense popularity and even made the bestseller list. 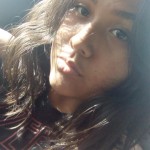 Mia, is a sophomore at Marjory Stoneman Douglas High School. She loves photography, art and music. She expects to graduate from high school and go a good college