Life in Color takes over Miami 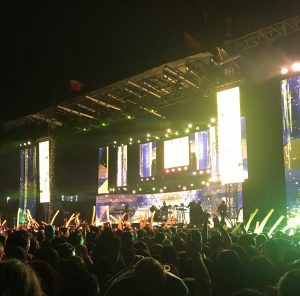 Life in Color, a festival that features EDM music and rappers, is most known for leaving anyone who attends covered in paint. LIC took place on Sunday, Jan. 14 in the Mana Wynwood Convention Center. The rave’s doors opened at 4 p.m. and closed at 12 a.m.

The concert consisted of performers such as Zedd, Jaden Smith, Lil Pump, Snails, Blackbear, Quix, Parker and Destructo. The original line up list also included rapper 21 Savage, however, he was unable to make his appearance when it was time for his performance.

Most students who attended LIC arrived with crazy colored clothes, holographic glitter and rhinestones all over. People also carried backpacks or fanny packs to protect their belongings from the paint.

The line to get into the festival went around at least four blocks. Though, once the attendees got to the front, the security team was very lenient.

Compared to last year, Life in Color’s 10th anniversary, there were fewer paint blasts given to the crowd, not including minor splatters during each DJ. This was a disappointment to some people since the whole point of the concert is to be drenched in paint.

“There was way less paint than last year, which was kind of sad,” senior Hunter Ballou said. “I was definitely looking forward to being covered from head to toe.”

While listening to the music, the audience was able to get food from the multiple food trucks parked.

Snails got the audience the most excited. Everyone seemed to really love their hour-long set. Later on in the night, Zedd concluded the show and performed an amazing set. With special effects such as fire and lasers, the crowd went crazy. When the concert ended, and thousands of people walked out with paint in their hair and on their faces, everyone seemed to enjoy the festival.