Senior Hunter Frybergh is a member of the Eagle Regiment marching band. He has played the trombone for six years and the piano for two years. He attends classes and rehearsals weekly as a member of the school band.

Before the start of high school, Frybergh viewed music more as a hobby. However, as a freshman, his passion for music inspired him to join the school band.

“At first, I could have cared less and it seemed to be more of a ‘hobby’ than it could have been,” Frybergh said. “But then as I realized everyone was better than me, especially my brothers, and everyone had expected more from me, I promised myself to become the best, no matter what it took.”

For Frybergh, joining band was a way for him to explore a different path than his brothers.

“I knew that I would be doing something unexpected rather than following in my older brothers’ footsteps with debate and DECA,” Frybergh said.

Throughout his band experience, Frybergh has made countless memories, one of which would be playing alongside Alex Schachter. Schachter, once a trombone player for the Eagle Regiment, lost his life during the shooting on Feb. 14, 2018, at MSD.

“My favorite part about playing my instrument is remembering Alex Schachter, one of my first notable friends and colleagues in music, and appreciating music as much as he could have if he were still here today,” Frybergh said.

Throughout his high school career, Frybergh has learned to organize his busy academic and extracurricular schedule.

“[Fitting music into] my schedule felt completely impossible when I was a freshman but when I took on a lot more musical activity my sophomore year, I realized how little [musical activity] I had freshman year and appreciated the little academic-based time then because I knew the following year would be even more impossible,” Frybergh said.

Frybergh has excelled musically throughout his years at MSD. His diligent work ethic makes him both a dedicated student and member of the Eagle Regiment since his freshman year. 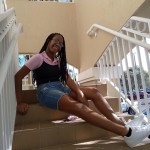 Briana Martin is a freshman at Marjory Stoneman Douglas High School. She enjoys playing guitar and hanging out with friends.