‘Passengers’ shoots for the stars and reaches them 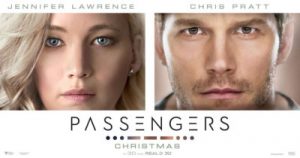 The movie consists of many twists and turns and the main actors, Chris Pratt and Jennifer Lawrence, performed with great chemistry on the big screen. The movie takes place in the future when humans are using space travel and inhabiting new planets. The travel to a new home takes a very long time which results in humans spending most of the trip in a hibernation pod. In the spaceship, a certain hibernation pod malfunctioned and awoke passenger Jim Preston (Chris Pratt) 90 years to early. He attempts everything in his power to fix his hibernation pod, but it nothing works.

After spending a whole year alone and touring the entire ship, Jim Preston has to make the hardest decision involving the one and only Aurora Lane (Jennifer Lawrence). The rest of the movie is full of drama, sorrow, comedy and romance.

Overall, the movie was written and played out well, though many viewers seem to have complaints about the quality of the special effects. The ratings for the movie varied. IMDb rated it about seven out of ten, Rotten Tomatoes rated it a 31 percent and Common Sense Media gave it a three out of five stars.

The film contained every genre, but was classified as fantasy and science fiction, though many critics disagree believing that it should be categorized into the romance genre. The picture was very intriguing. considering only four characters would reappear after one scene. The effects were the eye catching part of the film; they made the allusion of space and objects in space. Also, the set was a fantastic imitation to what is contemplated as the future now fro, the hibernation pods to the bars and restaurants.