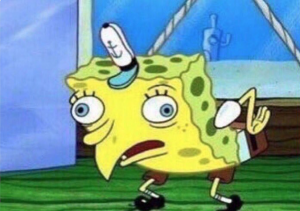 Grumpy cat. Success kid. The world’s most interesting man. What do these all have in common? They are all part of the online phenomenon that has encompassed the internet for the past 20 years: memes.

Originally coined by evolutionary biologist Richard Dawkins in his 1976 book, “The Selfish Gene,” the word “meme” is derived from the Greek word “mimeme,” meaning “something that is imitated.” The term originally belonged solely to memeology. It described the transmission and evolution of cultural ideas in a scientific manner. In recent times, it has devolved to a common phrase for any humorous image, video or text that is copied and slightly altered before being spread rapidly by internet users.

Meme enthusiasts have been locked in an endless debate over which internet meme has the glory of being labeled the first, and there are a few title contenders. The most commonly labeled “first internet meme,” goes to the “dancing baby,” or “baby cha-cha-cha.”

Developed by LucasArts developers, the Graphics Interchange Format, or GIF, spread to mainstream success and even made its way onto a television episode of “Ally McBeal”—a clear signal of success in today’s society.

The true first meme, however, has been around for longer than the Internet. Often accompanied with skulls, bones and other symbols of mortality, the phrase “Memento Mori,” Latin for “remember that you have to die,” has been present since the Roman Empire. The idea that one is faced with imminent death is a rather morbid thought, but it is one that is almost universally recognized across all cultures. This universal recognition makes it the first true meme to encompass a global society.

Most memes of today tend to be less morbid than the dark and empty eyes of a skull. In fact, they tend to be rather humorous. A common example is being “rick-rolled,” a prank involving an unexpected appearance of the music video for the 1987 Rick Astley song “Never Gonna Give You Up.” The meme is a type of bait and switch using a disguised hyperlink. Whether it be the god-like status achieved by the late Harambe, or the “Charlie bit my finger” video, memes have unquestionably become part of modern society.

Due to the fact that there is almost instantaneous communication of news, thanks to the development of social media, memes have dramatically increased in importance over the last couple years. For many people, a breaking news event will be seen in the form of a meme long before they will view it on a news channel. This stems not only from the evolution of social media as a whole, but also from the mindset of today’s youth.

“I watch the news in the morning, but, since I have a very busy schedule, I’m not able to watch the news again until the next day,” junior Alex Barbosa said.  “Thanks to social media though, I can see breaking news events on my phone, and since the memes tend to be funny, I actually pay attention to them.”

According to the National Center for Biotechnology Information at the U.S. National Library of Medicine, the average attention span of a human has dropped from 12 seconds in 2000 to 8 seconds in 2013.

This attention deficit, exacerbated by the political atmosphere that has been taken on by late-night comedy, has created an environment where politics seem to infiltrate every corner of daily life, and according to Heather LaMarre, a Media and Communication Associate Professor, for some people it is suffocating.

“For the guy who goes and works 50 hours a week just trying to make ends meet for his family, and he just wants to sit down and watch the 11 o’clock news and laugh a few times before going to bed, there’s this feeling now that everything is political,” LaMarre said to The Christian Science Monitor in May of 2017. “People just don’t have an escape, and they’re frustrated that they don’t have an escape.”

Conscious of the fact that people’s limited attention spans will prevent them from paying attention to many of the key details of an issue, comedy show hosts instead aim to make key points that will gain them brief internet fame on social media, thus reaching more people as a result.

“Each of the current late-night satirists are competing for viewers and for the sort of relevance that only comes from being GIFfed, memed, retweeted or posted to Facebook,” Religious and Ethical Studies Assistant Professor Steven Benko said to The Christian Science Monitor.

However, late-night comedy is not the only outlet for memes to shine in. The extremely popular meme, “Pepe the frog,” gained infamy when it was branded as a hate symbol for its depictions as both Adolf Hitler and a member of the KKK. The fact that memes are now being used not only as political constructs, but also as social ones is a testament to the impact memes are having on modern society.

As the world continues to progress into a new age of comedy on the platform of social media in the form of memes, society will have to choose the direction in which that form of comedy is heading. People will have to choose whether memes should continue down the increasingly serious atmosphere that the political undertone has created or return to the light-hearted fun that its creators had intended.

Lewis Mizen, de facto Lord of Glencoe Wood, is a senior at Marjory Stoneman Douglas High School. British born, he offers his apologies for any extra "U's" you may find in his articles. Along with working as a writer for the Eagle Eye newspaper he is also serves as the Treasurer for Rho Kappa and the Secretary of Politics Club.