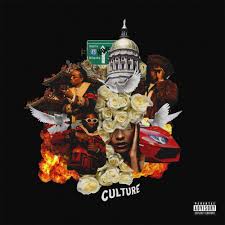 Fans worldwide have been waiting for the official release of Migos’ new album, “Culture.”

Migos has always managed to eschew the rules of mainstream rap and have created unique music of their own that fans go wild for.

In the real world, “Culture“ consists of mix tapes and one-offs. Migos had a rough period of time where everything they wrote was very dry, but the group eventually came back around. Now, they have a number one hit and they want to stick at the top of the “Top Hits” pyramid.

“Culture”’ is a good representation of what’s currently popular in rap music right now. Terms such as “skrt, skrt” are included which is a popular phrase in rap songs.

The first voice heard in the “Culture” album is DJ Khaled’s, which may come off as misleading because it isn’t the Migos voice. The initial track is followed by two other songs, “What the Price,” and “Brown Paper Bag,” which are both more soft and include a piano tune in the background.

The album has a nice balance of rapping and background beats with songs such as “T-shirt,” “Call Casting” and “Bad and Boujee.” These tunes are not only packed with intense rapping but also life, a good beat and a strong message.

“I love Migos’ new album. It always gets me in a good mood and it is my go-to album to listen to when I am hanging out with my friends,” freshman Coby Mayo said.

The album was released on Jan. 27 and ever since, fans have been going crazy for the music.

Unfortunately, Migos will not being performing live in Florida anytime soon. However, many fans agree that just listening to their music with friends can create a concert vibe of its own.

“When listening to Migos with my friends, especially in the car, I always have so much fun singing along and dancing to the beat. We all agree it’s lit,” sophomore Meghan Hill said.

Overall, there is not one disappointing track on the album as evidenced when they hit number one on the Billboard for both their album and “Bad and Boujee” single.