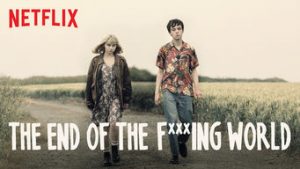 The UK television series, “End of the F***ing World,” exclusively released in October 2017 on Channel 4, made its way to Netflix on Jan. 5, starting out the new year with a binge-worthy series for young adults. The series is based on the graphic novel written and illustrated by Charles Forsman, following the story of two 17 year olds James (Alex Lawther) and Alyssa (Jessica Barden).

James believes that he is a sociopath and has decided that he wants to start killing people after secretly murdering small animals throughout his childhood. Alyssa, the new girl at school, is drawn to James and convinces him to run away with her to her dad’s house. Alyssa becomes the perfect candidate for James’s first human kill, so he agrees to her offer, beginning their crazy adventure together.

Important pieces of the show include Alyssa and James. Their connection to each other is not a romantic one. The show is not about building infatuation between two teenagers. They begin to care for each other in a way that is unique to them. Without them, it would just seem like a stereotypical story about two teens running away and going on a stereotypical road trip. Throughout their journey, they change and reveal their true personalities in the end.

Alyssa is headstrong, straightforward and a little rude at times. However, she is also emotional and vulnerable, making her more complex than her outward personality. James appears to be a silent psycho with no feelings, but when he meets Alyssa, things begin to change.

Even though the characters are eccentric, teens can also relate to them at the same time. The feeling of being an outsider and the fear of growing up are two prominent topics of the show that teenagers experience in high school. Navigating through family problems is a topic dealt with in this show that some teenagers have experienced in their life as well.

The combination of humor and aesthetic contributes to the appeal and entertainment of the show. The grunge fashion and rebellious aesthetic make it visually appealing. The humor is combined perfectly with the heavy moments that are shown throughout the series.

The show has one season with eight episodes, each lasting close to 25 minutes. Because of the length of the series, it is very easy for someone to succumb to the temptation to watch it in one day.

There are rumors of a second season, but the first season is enough and has covered its multiple topics well. This small Netflix series makes a big impression on its viewers by its unique approach to teenage struggles with dark humor.