Another season has come and gone on the cult favorite Adult Swim animated series, “Rick and Morty.” Sunday, Oct. 1 marked an end to the show’s third season since its initial airing after a strategic April Fool’s release. In its third season, “Rick and Morty” revealed more about the characters and plot than its prior seasons. Each episode was filled with exquisite writing and animation to advance the plot.

The show primarily follows the life of elderly scientist Rick Sanchez and his grandson, Morty as they go on adventures across the ever-expanding multiverse.

In its third season, “Rick and Morty” brings focus toward the entire Smith family as Morty’s parents go through a divorce offscreen. The viewers only observe the repercussions of their divorce from episode to episode. Morty’s mother, Beth Smith, and father, Jerry Smith, are not in a scene together until the season finale. Morty’s sister, Summer Smith, becomes more jaded with reality and begins to act more like her grandfather in personality, while not seeming to hold his intelligence.

This season continues the episodic story structure similar to many animated shows, but it also sprinkles in a season-long story arc behind the self-contained stories. Relationships between the members of the Smith residence are questioned as each of them become dissatisfied with one another. Later, the characters realize that in a universe of uncertainty and chance, the few connections they hold bring meaning into their insignificant lives. Nihilism, the belief that life is meaningless, is a key theme in the series.

The main staple of the show is its ability to convey emotion and philosophy in a family unit that is seemingly detached from their own reality. The show leaves viewers asking essential questions about existence by balancing a moral argument with a comedic set of circumstances.

This season alone sets up a conflict between intelligence, toxicity, and free will. First described in the episode “Pickle Rick,” Rick turns himself into a pickle in order to escape family therapy, only to end up there after a solo adventure through the sewer and an Eastern European embassy.

The therapy session not only introduces the dynamic between Rick and Beth but also brings the key concepts of this season to light in the form of the therapist’s monologue. The family counselor gave a long speech that relates Rick’s valuation of intelligence to his toxic behavior along with the heavy notion that all of his actions are of his own accord.

Episodes to follow this cement these concepts as the “ABC’s of Beth” allows Rick and Beth’s past to be explored in Beth’s childhood playland, Froopyland. This episode ends with Beth questioning her own purpose in life and Rick presents her the option to leave and explore the multiverse to find herself. Rick delves into the themes explored in the therapy office as the concept of choice is brought back into question.

The choice Beth makes is made offscreen, leaving the fan base in a state of uncertainty over Beth’s fate. Fans are now left waiting to find out if that plotline will be resolved in a future season.

Another episode that brings viewers closer to the distant super-genius is “Rest and Ricklaxsation.” This episode begins as Rick and Morty embark on a “Star Wars” style adventure, but later they become worn by pressures exerted on them during their journey. Rick even shouts, “I was not in control of that situation at all!” with a distinct, fearful tone to his words. This episode also displays the dynamic duo as their toxic tendencies manifest into human form playing the episode’s antagonists. This episode prompts viewers to question the idea of toxic behavior as Rick perceives attachment and superiority to fall into a destructive category, further developing his character.

Other episodes in this season allow for story-building as episodes like “Vindicators 3: The Return of World Ender” and “Morty’s Mindblowers” include references and flashbacks to previously unseen adventures. The show’s autonomy from the audience means that the show exists whether the stories are being observed by a viewer or not. Independence from viewers is a specialty of series co-creator Dan Harmon. Harmon also created the sitcom, “Community,” which did not show its viewers every experience of the characters in the series.

Although it developed characters and themes, the third season of “Rick and Morty” underperformed. Dan Harmon promised fans of the show a fourteen-episode season, but the season ended after a rushed ten. This unfulfillment has been accredited to long writing debates between creators over the show’s direction along with personal problems like Harmon’s divorce. The loss of episodes made it all the more precious to fans, making this season of Rick and Morty ended as the most viewed season of television on Adult Swim. The season also ended with a 98 percent rating on Rotten Tomatoes

Rick and Morty Season Three is out now on Hulu and Adult Swim. 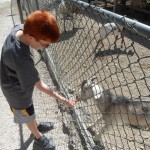