On Friday, Dec. 25, 2020, Warner Bros. Pictures released “Wonder Woman 1984. It was directed by Patty Jenkins and written by Geoff Johns and Dave Callahan. This film is the sequel to the enormously popular film “Wonder Woman.”

The movie follows the stunning Diana Prince, played by Gal Gadot, as she embarks on yet another mission to save mankind. Diana, still mourning her deceased love, Steve Trevor, befriends the socially awkward and unassertive Barbara Minerva, played by Kristen Wiig. Together they discover the dreamstone, an ancient stone that supposedly grants one wish to anyone holding it.

Still skeptical about the powers of the stone, Diana unknowingly wishes Steve (Chris Pine) back to life. Equally curious, Barbara wishes to be just like Diana: strong, beautiful and confident. To their surprise, both their wishes are granted.

The combination of action, comedy and romance within these first few scenes helped to create an unforgettable experience for the viewers.

The next crucial character introduced is the arrogant and deceitful Maxwell Lord, played by Pedro Pascal. In order to save his failing oil business, Maxwell carries out an elaborate hoax to distract Barbara, steal the dreamstone and become the stone itself.

The conflict within the storyline was quite anticlimactic and uninteresting. Especially considering the extravagant plot at the heart of the previous movie, some viewers felt that the writers could have done more to intensify the scenes during what was intended to be the climax.

Extremely satisfied with their newfound happiness, Diana and Barbara refuse to give up their new and improved lives. Their stubborn behavior and failure to let go of their wishes results in disaster. One in which Diana must clean up.

The last few scenes were definitely the most striking and heartwarming parts of the film. The movie ends with a bit of mystery and excitement as it is revealed that Astyria, Diana’s aunt, was living among humans; this allowed a cameo for Lynda Carter, who played Wonder Women in the 1970s television series.

Overall, the film satisfied viewers and kept them interested in this ongoing series. Despite a few mishaps, “Wonder Woman 1984” was not a complete disappointment and fans are hopeful that another movie will be added to the series. 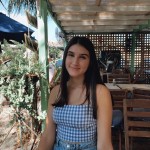 Sophia Golberg is a sophomore at Marjory Stoneman Douglas High School. She is a first-year staff member for the Eagle Eye. She enjoys baking and spending time with her friends.