The Spoken Word Club had their first open mic night on Dec. 6 from 6-8 p.m. in the media center for $5, to raise money for their club. Anyone was able to sign up to perform poetry, sing, do stand up comedy or any original piece of performance art they wished to share. Students were also offered extra credit for attending the event from some English classes.

“I was really happy with the way this year’s open mic night went. We had a fantastic turnout and a lot of amazing poets and singers performed. We love getting to hear the voices of the MSD student body and, as always, they did not disappoint,” Spoken Word President Anna Bayuk said.

Members of the Spoken Word Club used this event to prepare for their big competition in April called “Louder Than a Bomb.” This fundraiser will help pay for the competition for things like transportation. It was encouraged for those who performed to exhibit their performance and share their voice with the audience.

“I really liked our December open mic this year. I think it was beneficial for both the people in our club and all those who came. So many people in our club were willing to add their own touch in the preparation for the event, while the community provided entertainment and an audience. I especially love how students who aren’t able to come to our club because of schedules and such can still attend the club’s fundraisers and events,” Spoken Word Secretary Madelyn Wilson said.

The media center was decorated with fairy lights and tapestries, and they provided food that was catered from Publix and Fresh Market. It was a big turnout and many people were pleased with the performances. They wanted it to be Christmas themed to capture the audience’s attention.

This event gave many students the opportunity to present their piece and express themselves in their own creative way. It allowed people to listen to their perspective and it is an amazing way to let students speak their minds and have a great support system. 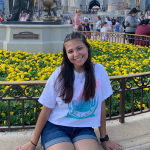