“Stranger Things” comes out with a second season 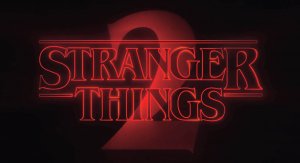 The hit Netflix original series “Stranger Things,” created by the Duffer Brothers, is back with Will Byers (Noah Schnapp) returning from the mysterious upside down and reuniting with his friends Mike (Finn Wolfhard), Lucas (Caleb Mclaughlin) and Dustin (Gaten Matarazzo) in its second season. Because of its immense popularity with the first season, the premiere episode of season 2 drew in a huge audience of 15.8 million viewers within the first three days of its launch on Oct. 27, 2017.

“Stranger Things 2” is set yet again in the small town of Hawkins, Indiana in 1984, exactly one year after Will went missing. The plot line greatly differs from season 1 because now that Will is back, the Duffer Brothers are able to focus on the different elements of the show.

A new season also means new characters. Joyce Byers’ (Winona Ryder) boyfriend Bob Newman (Sean Astin) becomes more involved in Joyce’s life and the weird happenings of Hawkins. The new girl at the kids’ school, Max Mayfield (Sadie Sink), is a new addition to the group, although she is not fully accepted at first. Her step brother Billy Hargrove (Dacre Montgomery) is more concerning than favorable in the show because of his aggressive attitude toward his sister and her friends.

A mysterious girl named Kali, who was originally from Hawkins Lab, with the tattoo “008” has powers similar to Eleven and opens the show in the first episode. Her character is expanded on in later episodes.

The Duffer Brothers keep the habit of dividing the characters into groups to create separate story lines and later unite the characters in the end to solve the big mystery of the season. However, since the two seasons are focused on different aspects of the show, it is difficult to compare the quality of the two.

While the classic group with Mike, Lucas, Dustin and Eleven, is loved by many, sadly season 2 does not have the gang united as much as viewers hoped they would. But when Steve Harrington is recruited by Dustin to catch a missing baby demogorgon with the kids, he is portrayed like a babysitter, or a “father figure,” which made up for the lack of time spent with the original group for many “Stranger Things” fans..

Shockingly, Steve Harrington (Joe Keery) became a new fan-favorite. At first, he just seemed like a popular, stuck up teenager, making most viewers favor underdog Jonathan Byers(Charlie Heaton) over Steve. Season 2 shows his softer side when he develops a cool but protective babysitter relationship with the kids, and demonstrates how much he actually cares about Nancy.

Unlike season 1, Will is featured much more often as the main character, but what kind of person he really is still a mystery. The shadow monster greatly interfered with his personality, adding intensity to the plot but  preventing character-developing interactions with his friends and family.

There were also some parts in the season that did not seem that important to plot, like episode 7, “The Lost Sister,” when Eleven meets Kali on her adventure of self-discovery. It derailed from the story line, and we only meet Kali and her group of juvenile delinquents for one episode.

Aside from those problems, the things fans love about “Stranger Things” still has not changed. The 80’s setting and sci-fi vibes give a contrast to what is usually seen on television today. The audience is able to watch the cast grow older, making the show more sentimental and unforgettable. The 80s music in each episode is also a plus.

Overall, the second season did not disappoint. The plot twists were unpredictable and shocking, leaving many viewers wanting to binge every episode in one sitting. Viewers got to see a reunion they have all been waiting for, with questions left from season 1 answered, and new characters that are as lovable as the originals (with the exception of Billy).

While the second season did answer a few questions left behind from season 1, it created a few questions of its own that will have to be answered in season 3.  Fans can watch the next season of “Stranger Things” will come out at the end of 2018 or beginning of 2019 to see what happens next for the beloved characters.