Supreme Court Justice Ruth Bader Ginsburg’s death on Sept. 18 left an untimely vacancy on the nation’s highest court. With Election Day on Nov. 3, it is not the proper time to have that spot replaced. Instead, the person who fulfills the role of the ninth Supreme Court Justice should have been chosen after the new president of the United States is elected.

By filling the seat, Republican senators are going against something that they said in 2016: there should not be a new Justice appointed during an election year. The Democrats pushed for a nomination to be made after Trump won the election, but Trump said it was his right to fill the position once he had been sworn in.

Barrett has completely different opinions that previous Justice Ginsburg had on a variety of areas including abortion rights, gay rights, business regulation and the environment. She will destroy what Justice Ginsburg has implemented thus far.

If Trump loses the election, former Vice President Biden will be stuck with a Supreme Court Justice that does not believe in the same things he does. Not only would holding off the nomination benefit those who oppose Trump, but Republicans could reap the benefits of keeping Senate seats if the new Justice isn’t appointed before Election Day.

When Joe Biden was the chairman of the Senate Judiciary Committee in 1992, a situation close to this court vacancy occurred, and Biden argued that President George H.W. Bush should wait until the end of the “political season” to appoint a new Justice. This became known as “the Biden Rule” and was used by Senate Republicans in 2016 to block President Obama from appointing a Justice to the court.

The election would give the American people a chance to decide if they want Biden or Trump to fill the vacant court seat. President Trump should have waited to see if he gets re-elected before making this choice out of courtesy to the wishes of the voters. Replacing a Justice so close to an election discounts the people who supported Trump in 2016, but will be voting for Biden this election year.

Trump and the Senate should have questioned Barrett more instead of rushing a confirmation that would be impacting the United States right away, especially with any election disputes waiting to reach the Supreme Court.

On the Court, Barrett is most likely to issue rulings that make the country a more unjust place, with rulings that erode the rights of workers, immigrants, criminal defendants and those who want abortions. If the seat had been filled after the election, the president elected by the people and for the people would have been able to make that choice of who the Supreme Court Justice would be. 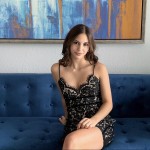 Ava Jurick is a sophomore at Marjory Stoneman Douglas High School She is a hard-working and talented Eagle Eye staff member.