For just a few months, the realists in all of us are temporarily smothered under reindeer blowups, thanksgiving turkeys, ghosts and goblins and dancing lights that run the rims of rooftops. While most of us teenagers wrap up college applications, rather than wrapping presents, its important to remember why holidays are such significant events in our lives.
Yes, we know the stories of Santa Claus and his tenacious elves are purely fictional, but the euphoria that radiates from the holiday season is unambiguously alive. Indulging in the holidays can quite literally better one’s mental health and remind us of the things that matter during our relentless search for success.
If we are all being honest here, the holidays hardly feel like they did when we were young. Specifically, the teenage inclination to be mature, as early as possible, has put a fast pass on childhood innocence. Take Halloween for instance; an 8-year-old in a bunny costume and a 19-year-old in a bunny costume are two entirely different images, as you can imagine. Granted, growing up is necessary, but taking pleasure in the purity of holiday spirit does not make one immature by any stretch.
According to USA Today, 27 percent of high school students polled rated their academic stress, on a scale of one to ten, between an eight and a ten.  That being said, the mental health of teenagers is dangerously at risk, possibly due to the heavy course load and competitive nature of college acceptance. For those serious about academics, there is not enough time for fun.
According to the New York Times, Christmas has been deemed the happiest day of the year by a large margin. Why might this be? Holidays, such as Christmas, are an excuse for us to play games, interact with friends and family, and maintain a consistent tradition in our ever-changing lives. Homework will always be important, but homework also lacks the ability to bring you closer with those around you. Put down the book and the cell phone and seize the moment people.
At times, the educational environment requires a “survival of the fittest” mentality. We do what we have to do to get where we want to go, it is that simple. Unfortunately, this fosters the attitude to think of ourselves highly, while the relationships we have become less intimate. Think of the holiday season as our little alarm clock, reminding us of the importance of generosity.
With the persistent chores we fixate on to get ourselves through the day, we often forget what it means to give back.  According to the Huffington Post, the link between giving and, in turn, achieving happiness, dates back to more than 2,500 years ago. Buddha taught that the way to achieve nirvana (ultimate happiness) is by “filling your mind with compassion.”  The holidays not only give us ample opportunity to give appreciation to our loved ones, but also give us the opportunity to be satisfied with who we are.
Despite some lame social norm, no one is too old to participate in the holiday season. There will never be a time limit on appropriateness of an awesome superhero costume, and there is never too many times a person can run down the stairs on Christmas morning to see what Santa brought. 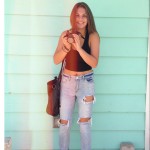 Julia is the Online Editor-in-chief for The Eagle Eye as well as the Editorial Editor for the print news magazine. She is 18 and plays competitive soccer; she also plans to major in English and Creative Writing.