Aspiring meteorologist is disappointed to evacuate

Despite his desire to stay, sophomore Tyler Foran evacuated to Columbia, South Carolina due to the threat Hurricane Irma posed to South Florida. 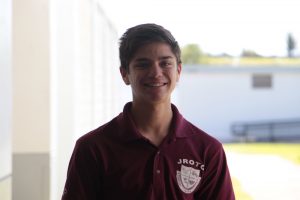 oran wanted to stay in South Florida because he is an aspiring meteorologist. He saw the hurricane as an opportunity  to witness Irma’s impact first-hand and understand how a natural disaster can affect an area. However, like many families in the area, his family decided to evacuate.

“In my personal opinion, I would have liked to stay,” Foran said.

When he heard about Irma, Foran became excited to experience the outdoors in the midst of the hurricane.

“Most people would probably be waiting it out, but I would have gone outside because I’m curious,” Foran said.

When Hurricane Matthew hit last year, Foran went outside and researched the storm, using a weather station he purchased.

“I have this weather station outside that record wind speeds, air pressure and rainfalls,which I was monitoring during the hurricane last year,” Foran said.

Like many other students at Marjory Stoneman Douglas High School, Foran’s house lost power. When he came back from South Carolina on Tuesday, his power had not come back and remained out until the following Wednesday.

Nonetheless, he continued to study the record breaking pressure Irma maintained until Hurricane Maria beat it soon after.

“It was one of the strongest hurricanes in the Atlantic ever recorded and had one of the lowest pressures I’ve ever seen,” Foran said.

Foran studied Hurricane Irma due to his dream of becoming a meteorologist and interest in weather. Foran and most students have now resumed their daily routines in South Florida with no serious damage done in the community.