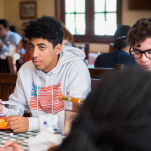 Daniel Fernando Williams is a senior at Marjory Stoneman Douglas. Aside from sleeping, he enjoys eating, running, and graphic design. Daniel serves as Historian for Politics Club and Astronomy Club