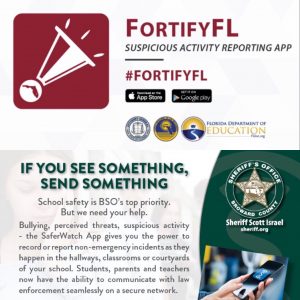 Many phone applications, including the Fortify Florida App and the Safer Watch App, were created for students and parents to report suspicious activity.

The Fortify Florida App was created by Attorney General Pam Bondi’s office, officials from the Florida Department of Law Enforcement and Department of Education.

The app was created due to the lack of transmission between law enforcement agencies and schools, mainly during the tragedy of Feb. 14. Even students from Marjory Stoneman Douglas High School helped name the app and create the logo.

“I think these apps are good,” parent and MSD alumna, Nicole Sotter said. “We just have to use them.”

Once Bondi spoke to students, parents and teachers from MSD, she made it her mission to create an application that could potentially help save lives.

The application was launched on Oct. 8 and after only a while of using the app, many parents and students started discovering flaws with it.

According to ABCActionNews, a Sarasota student reported an anonymous tip of a Facebook post that pictured a kid walking down the street holding a gun, and it seemed that the kid was possibly going to school. After the student sent an anonymous tip on the Fortify Florida app, deputies still showed up to the student’s home.

This causes a problem for consumers because the app allows them to decide if they want to be anonymous or not. If the student from Sarasota chose to be anonymous and authorities knew of his identity, then this may cause a decrease in buyers for the app, as they may not trust that their information may be disclosed.

“I like that I can report problems anonymously because I want to help in any way I can without my name being known,” sophomore Stephanie Horowitz said. “However, I don’t like how this app allows law enforcement to be able to have your information.”

“See something. Send something” is what BSO wants everyone to keep in mind when going on throughout their day. The Safer Watch app also gives students, teachers, and parents the ability to subscribe to a school’s location and receive alerts.

“It’s a great idea for the students to have these apps available to them for whenever they need it,” MSD Clerical, Ofelia Almonte said.

If any suspicious activity is seen, you can anonymously or non-anonymously report to both apps, the Fortify Florida App and the Safer Watch App. They can be used on the app or on their websites.

Nadia Murillo is a senior at Marjory Stoneman Douglas High School. She is the Social Media Editor for the Eagle Eye, which means that she runs all of the Eagle Eye's social media platforms. In the future, she hopes to pursue a career in public relations. When she isn't writing stories, she is either hanging out with friends, going on adventures, or sipping on a matcha latte.