As of Oct. 25, there have been 544,000 ballots cast in Broward County alone, with 365,000 votes cast by mail. Statewide, Floridians have already cast 5,961,000 total votes, with Florida Democrats seeing a historic 356,000 vote advantage, largely due to Democrats opting to vote-by-mail. The margins will almost surely narrow, with Florida Republicans encouraging their base to vote during the early voting period.

In Northwest Broward, early voting has been a sight, with both Democrat and Republican supporters showing up at the polls to campaign, as well as local candidates trying to garner last-minute support. Northwest Regional Library in Coral Springs has served as an early voting site for many previous elections, with this election being no different. According to the Broward Supervisor of Elections Office’s unofficial day-by-day reporting, roughly 14,000 votes were cast at the precinct by Oct. 24, the second most votes cast at any early voting site in Broward County. On the first day of early voting, lines were seen stretching for blocks, with people waiting nearly two hours to cast their vote in the early morning.

At Pine Trails Park Amphitheater, the early voting site in Parkland, turnout was almost half that of the Northwest Regional Library, with only 7,000 votes cast through Oct. 25.

At both early voting sites, local campaign volunteers, as well as Democrats and Republican supporters, have shown up to campaign and make the case as to why voters should vote for their candidate.

Francis Farnun, the President of the Coral Springs and Parkland Democratic Club, was at the Northwest Regional Library throughout the week supporting Joe Biden and the various Democrats running on the ballot.

“This year has been quite different. Because of the mail-in votes, we don’t have the crowds of voters that we had back back when Barack Obama was running and it tapered off even from 2016. We didn’t have a great turnout then,” Farnun said.“[As for] the turnout now, we’re attributing [that] to the mail-in ballots, and the numbers speak for themselves with the volume of ballots the Supervisor of Elections has already received.”

Jeanne Kacprzak, a volunteer with the Coral Springs and Parkland Republican Club and Parkland resident, handed out Republican reading material at the Park Trails Amphitheatre.

“I’m supporting Donald Trump because I grew up in the 60’s with the space program and I think that the United States can lead the world in science and technology, like what Trump’s doing with the Space Force,” Kacprzak said. “So many leaders in the past, both Democrat and Republicans, have put the United States in a bad position, such as fighting endless wars and moving manufacturing to China. Republicans stand for less regulations from the government, less taxes, building the economy from the base up, and won’t defund the police.”

As well as the presidential race, Coral Springs and Parkland have a variety of local races up for grabs this election, such as the positions of Parkland Mayor, Coral Springs Commission Seats 3 and 5, and 4 Parkland Commission seats. Rich Walker, a candidate for Parkland mayor, campaigned for himself at the Pine Trails Amphitheatre.

“Early voting has been fantastic this week, we’ve been averaging 1,100 votes per day but it’s more than that because a lot of people are dropping off their mail-in ballots as well,” Walker said. “Obviously we don’t want to get close to people and people aren’t as receptive to talking, so it looks like more people have done their homework, which is a good thing.”

Walker believes he is best suited to be the next Parkland mayor.

“I’m engaged and hold a huge stake in the community. I have 5 children from ages 6 to 16 so every decision affects me and my family. It’s important to me that every decision we make we do not just for today but for tomorrow and years down the road,” Walker said. “As mayor, I’d love to give a voice to young families and focus on mental health. Obviously with the tragedy [2018 shooting at Marjory Stoneman Douglas High School], mental health is important but now with COVID it’s even more apparent to focus on our kids and ensure that they have all the services they need.”

“I genuinely think Nancy Metayer is the best candidate for Coral Springs City Commission, she’s more determined and has better stances than her opponents. One thing I really like about her is she wants to put public spaces such as studying spaces into the new Coral Springs corridor which would be really helpful and important to people like me, allowing people who may not have the best situation at home a place to be safe and relax,” Poveromo said. “She’s also really strong on the environment and is an environmental scientist so she knows what she’s talking about. There’s no one else I would support more than her.”

The 2020 election is shaping up to be one of the most important elections in America’s history, with voters deciding who the next president will be, among a variety of local decisions. Florida’s 29 electoral votes are key in deciding who is elected president, and the state has a history of being a swing state. When voting, make sure you have a good plan in place to safely ensure that your voice will be heard and know what’s on your ballot. 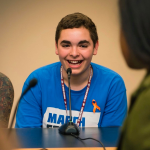 Logan Rubenstein is a junior at Marjory Stoneman Douglas High School and is a Politics and Activism writer for the Eagle Eye. Logan has a passion for local government and enjoys spending time with his dog.