Following the Feb. 14 shooting at Marjory Stoneman Douglas High School, several safety measures were established in order to further ensure the security of the students and staff. Having been in the works for almost three years, one of these projects is the installation of speakers in the hallways and common areas, both indoors and outdoors.

In the spring of 2018 a safety committee was formed by the teachers of MSD with the sole purpose of advocating for improved safety measures and precautions. One recommendation from the committee included the installation of exterior speakers due to the chaos that the lack of communication caused on Feb. 14.

When the fire alarm went off on the day of the shooting, teachers followed fire protocols, immediately evacuating their classrooms with their students. However, once they had left the building, they had no way of being notified that they were under a code red, some only learned about the situation by seeing people run in the opposite direction.

“There was a lot of chaos and confusion because administration really had no way to convey that there was a code red,” former committee member Melissa Falkowski said.

The safety committee dissolved after a year, and the action item was picked up  the Faculty Council, a group of 11 teachers who represent the faculty and are responsible for vocalizing the concerns of the staff. Since then, the installation had been an item on the Faculty Council’s agenda, eacg monthh.

“For those who were teaching at MSD on Feb. 14, the installation of these speakers marks the end of a three-year quest to upgrade the safety features of the school,” Falkowski said.

There are currently 50 speakers that were purchased by the district and were installed throughout the campus, allowing individuals to hear the intercom system when outside of the classroom or the office.

“It will enable anyone on campus to hear announced information, regardless of their location on campus. This will ensure everyone can hear information in the event of an emergency,” Principal Michelle Kefford said.

Assistant Principal Jay Milmed was involved throughout the process, participating in site walk-throughs and aiding in determining where the speakers should be placed. These site walk-throughs are to ensure that everything is done thoroughly and correctly.

“I did the site walk-throughs and helped with placement ideas throughout the process,” Milmed said.

The speakers have now been installed and tested. These new additions to the school’s security system have already been used for a few code drills and are currently fully functioning.

This story was originally published in the December 2020 Eagle Eye print edition. 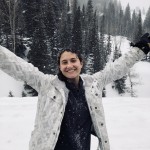