Their first game was very close with the  Eagles leading 12-11 at the end of the first quarter. The game continued to be close, but a higher scoring quarter as both teams headed into halftime 32 apiece. The second half was big for Monarch, as they attempted to take several shots, which drew a  lot of turnovers and fouls that led to them holding out for the win.

Even though they lost, the Eagles had players that lead the team throughout the first game. Athletes including Jordan Thomas (35), Myles Samuels (23), Bob Davis (32), Quincy Siffort (1), Dylan Stettner (2) and Dylan Burrowes (15). These players were motivated to start the season off strong.

Out of the many leading players during the first game for the Eagles, Samuels stuck out the most scoring 15 points overall.

“Playing close games was nerve racking, with them shooting the ball a lot at the end, very well. We just had to play up, and guard our men,”  Samuels said.

Starting center Burrowes had a good defensive game finish with 10 points and over five rebounds.

With the MSD  basketball team consisting of mostly sophomores and freshmen athletes, head coach Jason Sucarichi wanted to give his new players the chance to start in the second game.

The game started off poorly for the Eagles, as Monarch ended the first half with a 32-27 lead. Then, the Eagles started to transition into a more trap defense, forcing Monarch to take shots they weren’t used to. This led  MSD to make a come back in the third quarter, making it a score of  42-40.

The fourth quarter was back and forth action, neither team being able to score. Both teams drew turnovers, and the gym was loud at this point.  With 32 seconds left, Monarch freshman Jordan Waters drained a three, giving  Monarch a 50-47 lead, which ended up being the winning basket. With 3 seconds left, MSD inbounded the ball, but a last second shot was let go and it rimmed out.

Leading the first game for the Eagles was Samuels, who scored 15 points.

Starting center  Burrowes had a good defensive game finishing with 10 points and over five rebounds.

Coach Sucarichi was asked postgame about the defensive trap and man game plan and if they had to move away from that, due to the heavy three game by the Knights.

“We wanted a lot of ball pressure at full court, so we went to a trap, forced a few turnovers, after they beat it a couple times, you know we wanted to slow it down, we dropped into a 1-3-1 halfcourt defensive set,” Sucarichi said.

The men’s JV  basketball team had a bumpy start to the season, but gained experience from their losses. They are scheduled to play again on Jan. 23, against Northeast High School at 9 a.m. and Blanche Ely High School at 11:30 a.m., location to be determined. 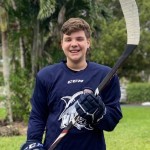