“I am very confident in both the girls’ and boys’ teams,” head coach Scott Beigel said. “They will definitely make it to Regionals.”

The cross country team will be moving onto Regionals, then hopefully the state championship. They will continue practicing and training rigorously to beat their personal records.

“We have one more hard workout to keep ourselves in shape before Regionals. We are going to work extra hard and keep practicing,” captain Nick Boyer said.

Gloomy weather with gusts of wind and light showers loomed over the event, but the competition continued nonetheless

“The weather was overcast and humid,” Beigel said. “It’s not great running weather.”

Many people reached new personal records because the season is coming to an end.

“The meet was great. We all ran really well and kept pushing ourselves until the end,” Boyer said.

“Some of us run as a pack. When we do this, we can share the work so one person is not pacing the whole time,” Boyer said.

Regionals will take place at South County Regional Park on Nov. 2 starting at 4:00 p.m. for both mens’ and womens’ cross country teams. 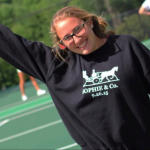 Olivia Melamed loves to play soccer. She wants to be a doctor when she grows up and her favorite subject is science. She also enjoys writing.