To qualify as an individual, one has to bowl the best series, which is three games combined, out of those who don’t qualify as a team. On Monday, Oct. 28, district competitions were held between all the teams in Broward County, which determined who qualified.

In addition to qualifying for States, Paris has also received many awards and achievements. She won the Bob Dykes Bowling Scholarship; she qualified for high school states as an individual in her sophomore,  junior and senior years. She was also part of the MSD bowling team, which qualified as a team last year.

Along with playing for the Stoneman Douglas team as an anchor, Paris bowls for her league: Strikers at Strikers Family Sportscenter on Saturdays. She currently has a 180 average with high score of 258 and a high series of 659. For matches, her teams bowls two actual games and one baker game.

While taking bowling very seriously, Paris also uses the sport to bond with her family.

“Bowling has been a part of my life for what seems like forever. My dad and my papa bowled and this was a way to get closer to them. I started in 5th grade, and I have loved it every year since,” Paris said.

“Bowling has provided me a way to make new friends and bond with some people I love. When I go bowling, all I do is laugh and love with some of my closest friends,” Paris said.

As a bowler in two different teams, Paris feels a lot of responsibility, especially when she is the last in line to bowl for the team, so she can potentially score extra points.

Carrying this responsibility on her shoulders, Paris also uses the fun of bowling as self-therapy.

“When I’m in some stressful situation or stressful time of my life, bowling helps me calm down and get my mind elsewhere. I am able to relax and do something I love without any worry,” Paris said.

Paris attended the state meet Nov. 7. She missed the qualifications to move on to the next rounds.

“I was one point away from 16th place. If you placed in the top 16, you would be able to move on to double elimination,” Paris said. “I missed the cut by one point.” 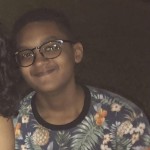