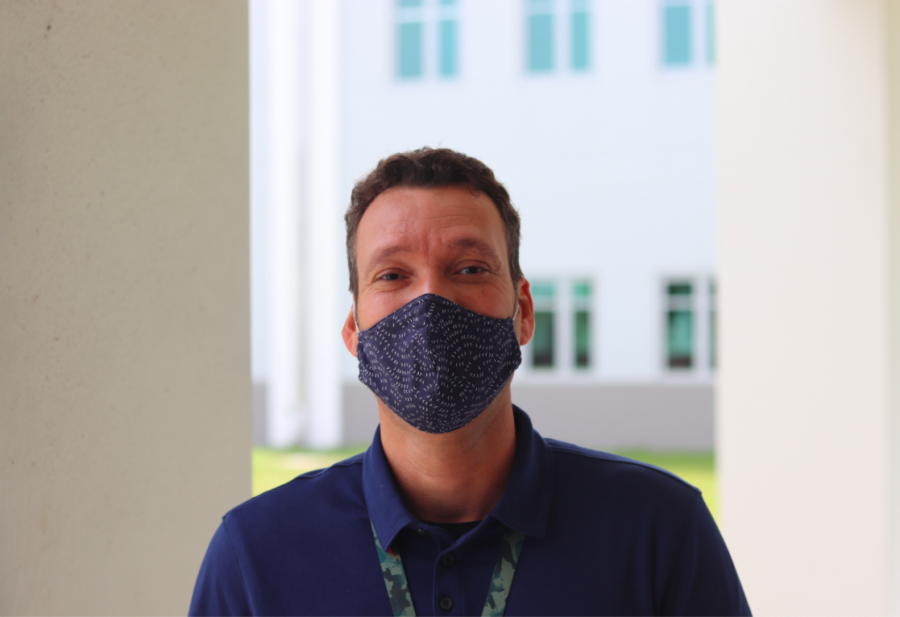 From medicine to Marjory Stoneman Douglas

“Funny story — my wife is actually a teacher. I was primarily doing pharmacy work [originally], I was working as a pharmacy technician for a long time [during and after college,]” Stefan Henry said. “So my wife said to me ‘I think you would be a good teacher,’ and I was like ‘well, I do have an English degree, so what else am I going to do?’ And that’s pretty much what happened, I applied, and I got a job at Flanagan [High School.]”

Henry, Marjory Stoneman Douglas High School’s newest ELA teacher, has a passion for his subject that transcends just his occupation. His love for literature makes many of his students consider him a great teacher and fuels his desire to write in his free time.

“I have a real love for philosophy and apologetics, so I do a lot of reading. I like to write! Writing is a good thing, hopefully I’ll be published one day,” Henry said. “[I write] fiction. I used to write a lot of poetry, [but] I haven’t done it in a while. I’m trying to write a lot more short stories and [I’m] attempting a novel at some point.”

Henry teaches English I and English I Honors at MSD. Due to overcrowding, he has a full load of classes, seven academic periods and one personalization period, like many other teachers this year.

Henry grew up in Jamaica and moved to the United States when he was 17 years old. He attended Florida International University, majoring in English literature and minoring in religious studies, and received an English degree. Before he was encouraged to get into the teaching profession by his wife, a teacher at Coral Glades High School, Henry worked in the field of medicine.

Mainly teaching English to Speakers of Other Languages (ESOL) classes and eleventh and twelfth grade English classes, Henry taught originally at Flanagan High School for six years. He disliked the 30 or more minute commute, but attributes his easy transition to MSD to the similar building layout between the two schools. He was hired by Principal Michelle Kefford during a series of hires meant to prepare the school for the 2021-2022 school year.

“[I was at] a job fair for teachers, and I was just kind of walking around the room and [Kefford] grabbed me, because she needed a male teacher at the time, and that was it,” Henry said.

The atmosphere of Henry’s room feels relaxed and cordial. He believes his casual attitude for teaching is the right approach when it comes to the stressful lives of students.

“I’m pretty laid back, I don’t usually write detentions and things like that, I kind of take it as it comes,” Henry said. “It’s real life, and things happen, so I’m pretty easygoing, and I’d like to think I’m empathetic to the concerns and needs of [my] students.”

His students seem to notice and appreciate his calm and caring demeanor.

“He’s a very good teacher. He cares about his students very much. When you’re having a hard time, you can always ask him and he’ll reassure you about what to do, no issues,” freshman Nadia Chavez said.

Many of his students describe the work he assigns as being a well-balanced course load.

“He’s nice, he’s polite and he’s cool with everyone. Something about [the work] makes it fun,” freshman Maksim Grinko said. “I consider [Mr. Henry] to be a friend.”

Apart from teaching, Henry enjoys reading and watching television in his spare time. His latest binge has been “Outsiders” on Hulu.

Henry says he has enjoyed the beginning of his tenure at MSD, and plans on staying for the foreseeable future.

“It’s been a good experience for me [so far,] positive all the way,” Henry said. “The plan is to be here for a little bit, unless another calling comes, unless I become a famous bestselling author!”