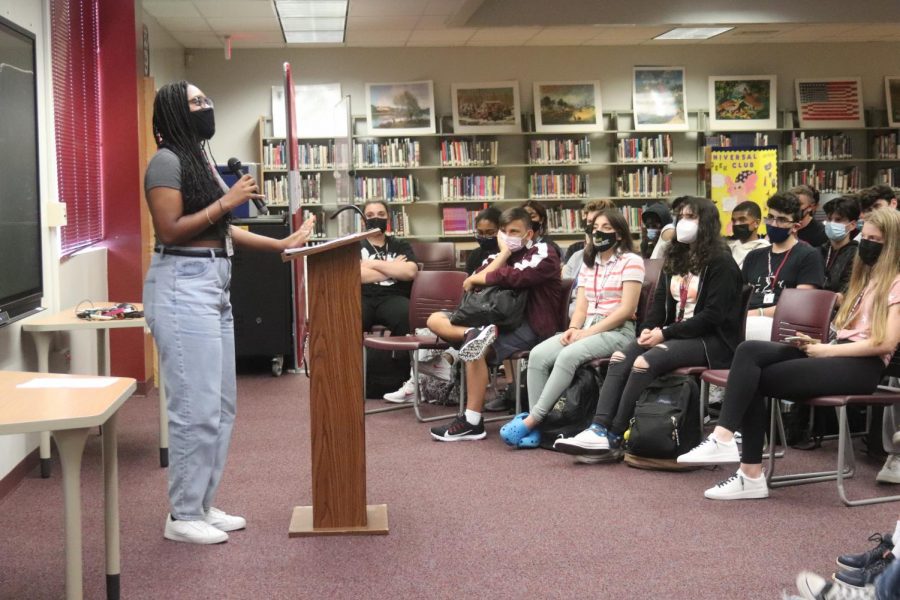 Tapping into character, junior Noldine Belizaire emotionally acts out a monologue in the media center from the book “With Their Eyes” on Friday, Sep. 10, as a part of the Drama Club’s presentation. In remembrance of the 9/11 attacks, “With Their Eyes” contains 23 perspectives of students and faculty at Stuyvesant High School that witnessed the attacks on the World Trade Center.

Back in 2003, Marjory Stoneman Douglas High School drama teacher Melody Herzfeld was approached by former student Daniel Burns about a book, “With Their Eyes.” At the time, it had been almost two years after the Sept. 11, 2001 terrorist attack in New York City on the World Trade Center. “With Their Eyes,” edited by Annie Thomas, is a series of monologues that were originally interviews of students and staff at Stuyvesant High School, who were located across the street from the Twin Towers and viewed the attack from ground zero.

Burns suggested that MSD drama should perform a number of the monologues for MSD on 9/11 to commemorate the anniversary. Each monologue gives a unique perspective on the attack and the aftermath, each being represented by a teacher, student, alumnus/alumna or staff member.

As the nation commemorates the 20th anniversary of 9/11, Herzfeld decided that it would be a good idea to present this again with her current students as a tribute. She believes that big monumental anniversaries of tragic events like 9/11 should be acknowledged to ensure the country and the community never forget what the people affected went through.

“I was excited to perform this specific monologue because of how real and genuine the stories were,” performer and junior Noldine Belizaire said. “I have always known about the impact that 9/11 had on this country and it’s people, but I got to step into a real person’s shoes for a couple minutes when performing. I believe that performing these monologues really opened up another perspective for those who were present to watch us do the 9/11 presentation.”

Similar to MSD and the tragedy of Feb. 14, 2018, Herzfeld knows how important it is to continue to remember and talk about circumstances where communities were harmed. Throughout the monologues, it is evident the similarity in events that MSD staff and students went through after the 2018 school shooting compared to Stuyvesant High School’s perspective.

“You know like in the monologue the 1,000 cranes they received, after the tragedy Douglas received sets of 1,000 cranes as well,” Herzfeld said. “I have some hanging from the ceiling in my [class]room and there used to be a set in the media center [too].”

The performance was held in the school media center, allowing only a select few of classes at MSD to watch it live. This made the performance more intimate and personal since teachers had to request that they wanted to attend.

The drama department will additionally be performing this piece at district competitions in November and December. Dates have not been released, however, they used this as a practice performance as they are still currently working on their pieces and memorizing them. 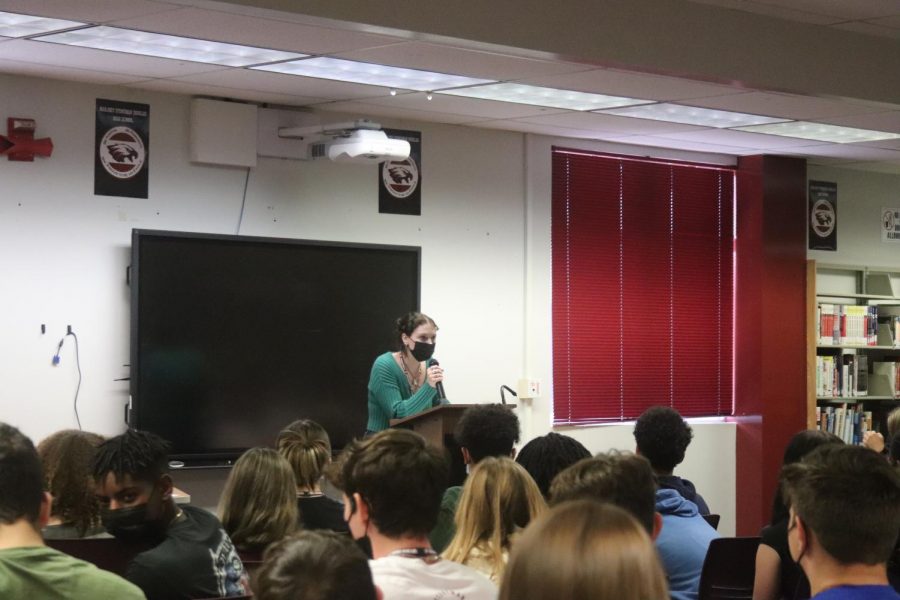 Donate to THE EAGLE EYE
$230
$1200
Contributed
Our Goal
Submitting donation...