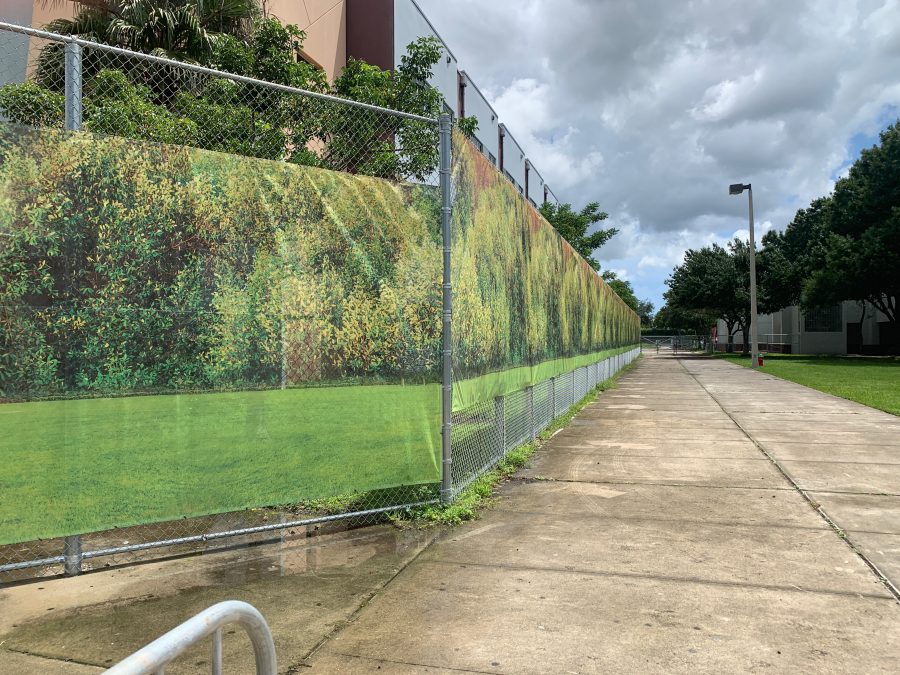 Installed in August 2019, a new banner depicting a calming forest scene surrounds the 1200 building. Following the Feb. 14, 2018 shooting at Marjory Stoneman Douglas High School that killed 17 students and staff members and injured another 17, the building has been designated a crime scene and is in the custody of the state attorney’s office. The building is still being reported as usable classroom space on the Florida Inventory of School Houses report for MSD.

The Florida Department of Education provides every school in Florida with a Florida Inventory of School Houses report measuring the occupancy for permanent and relocatable buildings on a school campus. This FISH report essentially provides the square footage of every classroom on campus to allow the school to set the number of students that should be placed per class per period. In addition, the report provides an overall number of students that the school can ultimately hold: the school capacity number.

At MSD, the FISH capacity number is currently calculated at 3,789 students. With school enrollment increasing over the past few years by 7.5%, the current school enrollment number for this year is 3,570. Comparatively, last year’s enrollment was 3,289, meaning there has been an increase of 281 students this school year, which can still fluctuate slightly during the year with new student enrollments or student withdrawals.

The official capacity number is affected by the continued inclusion of the 1200 building in MSD’s FISH report. This building accounts for 30 classrooms, which has the capacity to hold 713 students. The building has not been occupied since the Feb. 14, 2018 shooting at MSD, which resulted in the death of 14 students and 3 faculty members and physically injured 17 more. The building has been designated a crime scene until the conclusion of criminal proceedings against the shooter, and is under the jurisdiction of the State Attorney’s Office and the Broward Sheriff’s Office. In 2018 the Florida Legislature provided $20 million to Broward County Public Schools for the demolition of the 1200 building and the construction of a replacement building.

The 1500 building opened during the 2020-2021 school year with 30 additional classrooms, which added a capacity of 750 students to the school’s FISH report. The purpose of the addition was to replace the capacity lost from the inaccessibility and eventual demolition of the 1200 building. The intention was not to raise the FISH capacity, but to level out the capacity to the number before the incident. In fact, the Eagle Eye discovered a lack of communication between BCPS district officials and at least one MSD administrator, who was not aware that the 1200 building was still being calculated in the school’s total capacity by the district.

To date, the school’s FISH capacity number remains 3,789, which includes both buildings and raises the capacity of the school to an inaccurate number. To calculate the school’s actual capacity, 712 must be subtracted, which leaves room for 3,077 students. As previously stated, the current enrollment stands at 3,570 students.

One of the main problems this creates is that it makes MSD appear to be under-enrolled by 219 students on paper. In reality, since students and staff are only able to utilize the equivalent space for 3,077 students, MSD is over-enrolled by 493 students, which means the school is actually functioning at 116% of its capacity.

According to Jill Young, Director of the Demographics & Enrollment Planning Department for BCPS, the district will only address over- enrollment issues once a school reaches 100% of its capacity. The increase can’t be isolated or measured by a single year of growth, but must be shown as part of an increasing trend of enrollment.

On paper, the additional 712 students calculated into the school’s FISH capacity with the inclusion of the 1200 building makes it appear like MSD is operating at 94% capacity, when it is truly at 116%. This means that BCPS will not look to mitigate MSD’s overcrowding issues unless another 219 students enroll.

So why is the 1200 building still on MSD’s FISH report?

The Eagle Eye reached out to Violet Brown, the Senior Educational Program Director for the Florida Department of Education. Brown is listed as the contact on the FLDOE’s official FISH webpage. Brown referred us to Brett Tubbs, FLDOE Press Secretary, who never responded to our multiple attempts to get answers to our questions about why the 1200 building remains on MSD’s FISH report. He only provided an official copy of the report.

BCPS offered an explanation for the building’s continued inclusion on MSD’s FISH report.

“School capacity is a state-level calculation [that] is not determined in Broward County. This policy frequently results in redundant or unusable facility space being included in a school’s capacity and is such with the 1200 building at Marjory Stoneman Douglas High School,” Young said. “The 1200 building will remain in the school’s total capacity, however, until it is demolished.”

According to Young, the 1200 building cannot be removed due to Chapter 6, Section 6.1 (5) of the State Requirements for Educational Facilities. It is the district’s position that it can not legally remove the 1200 building from the MSD FISH report, until it is demolished.

However, SREF Section 6.1 (5) does not set specific conditions that must be met, like the demolition of the building, to remove it from the FISH report. It merely states “a district’s facilities inventory shall be corrected when new additions or remodeling occurs, during a validation study, or in any other event that causes or results in a change in square footage, student stations, design of a facilities space or the condition of a facilities space.”

In fact, BCPS reported a change in Plantation Middle School’s capacity to the state at the end of the 2020-2021 school year when it designated a building to be used by district security staff due to under-enrollment at the school. The conditions of the space changed, it was reported to the state, and that change is now reflected in Plantation Middle School’s FISH report.

In looking at BCPS’s Planning Tool for School Capacity, which under close examination does not accurately reflect MSD’s enrollment numbers or capacity percentages for last year or the current year, it is clear that BCPS does eventually intend to remove the 1200 building from MSD’s FISH report in two school years. The planning tool shows the capacity number dropping down from 3,789 to 3,077 in the 2023-2024 school year.

“The FISH Inventory represents the buildings as they were approved by the board and the FLDOE at the time of construction. The tragic circumstances that happened in the building do not change the original purpose of the construction,” Sandra Garzon, coordinator for the BCPS Facility Planning and Real Estate Department, said. “The School Board of Broward County is pending to receive clearance from authorities to demolish this building since it is part of an open investigation; that is why the data is not showing a potential demolition until Fiscal Year 2023-2024. If clearance occurs sooner building 12 will be removed from the inventory at that time.”

However, the district’s explanation ignores the portion of SREF 6.1 (5) that accounts for any event that changes the condition of a facilities space.

“I think that the district is required, under Section 6.1(5) to accurately record any decrease in student stations and update the information by submitting transactions through EFIS,” Joseph Garrity, an attorney at Lorium Law, said. “My opinion is that ‘or in any other event’ is purposefully broad to allow the district to account for many conditions that make student stations unusable.”

Garrity has two decades of litigation experience and one of his specialties is in construction defects. He is also a former industrial and construction engineer.

“For the purpose of comparing SREF definitions [page 23] states that relocatables that fail to meet standards…shall not be reported as providing satisfactory student stations in FISH. In other words, if you can’t use them don’t count them. Why would the 1200 building be different?” Garrity said. “[page 88] ‘Student Station’ is defined as ‘For planning purposes, the net square footage… per student… based upon the instructional program to be housed; used primarily to determine student capacity of school. No instructional program should ever be housed in the 1200 building and [page 87] further defines ‘Student Capacity’ as the number of students that can be satisfactorily housed in a facility at any given time.”

Garrity is also the director of Shine MSD, a not for profit foundation formed in the wake of the MSD shooting that seeks to heal the community through the arts. He is the parent of an Class of 2019 alumna and a current MSD student.

“Satisfactorily is defined by Oxford as ‘in a way that fulfills expectations or needs; acceptably,’’ Garrity said. “I have worked with hundreds of students, through Shine MSD since Feb. 14, 2018. They all deal with PTSD every day. There is nothing acceptable about ever using the 1200 building as satisfactory ‘Student Stations.’”

As a public school, MSD is required to accept all students within their school attendance boundaries. Factors like construction in the north part of Parkland along Loxahatchee Road, in conjunction with an exploding real estate market, has caused enrollment to swell and it could continue to grow.

About 75 acres of residential area in other cities near east Parkland will likely be annexed into Parkland, according to Vice Mayor Bob Mayersohn.

A final meeting on Nov. 3 will decide whether this will occur. If adopted, all 55+ communities in the annexed area will be altered to be open for residents of all ages. Considering this area accounts for about 210 housing units, this could have a profound effect on the school enrollment numbers in Parkland in the future.