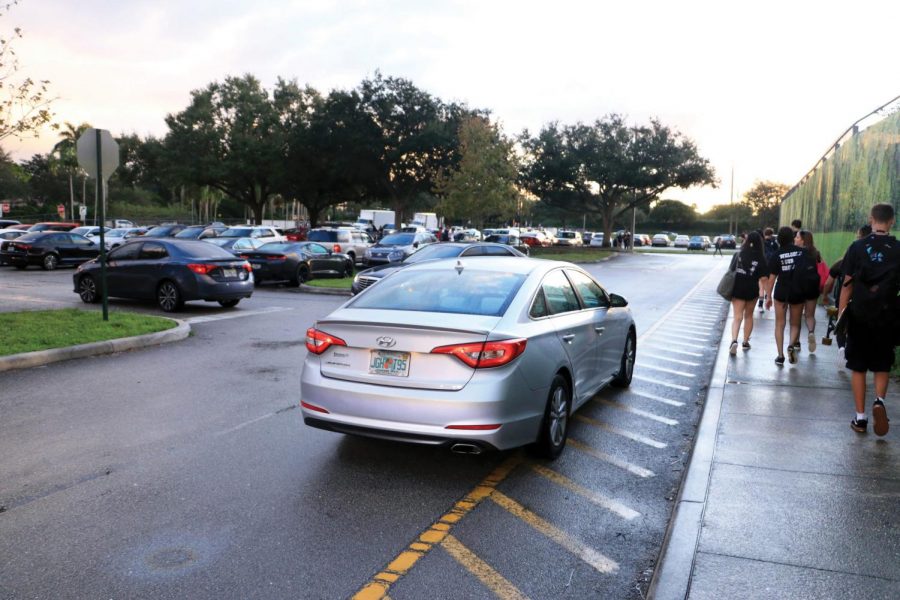 Need My Space. Seniors park in the senior lot before school starts and walk towards the 800 building entrance to school.

“The traffic in the morning is very hectic. I have to leave my house 45 minutes before school starts, to then wait in the line for 25 [minutes],” sophomore Arlanni Velez said.

The main way parents themselves drop their students off in the morning is by utilizing the car line. Once inside the gate, parents and students are directed by Principal Michelle Kefford and Broward Sheriff’s Office Deputy Dean Seymore. Situated on a fairly small landscape, the car line fills up quickly, pushing the surplus of waiting cars onto the main road.

Besides the small capacity of the car line, buildup is also caused by a lack of efficiency from both parents and students within the loop.

“[Staff] is trying to move cars forward, and kids are taking 3, 4, 5 minutes to get out of their car by taking their book bag and [going] to the trunk; if everything is ready and you just hop out of the car, traffic will move faster,” Milmed said.

About 52% of car line students state that it takes them more time to get to school than in previous years. Roughly 62% classify the car line’s efficiency as “well” and about 33% rate it as “poor,” leaving only around 5% calling it “efficient.”

Immediately next to the car line is the bus loop and teacher parking lot. Due to their close proximity to the car line, their turning lanes and entry points often become mixed with parents’ cars, resulting in slow entry to the school by buses and teachers.

“In the morning, usually around 7:05 or after, it gets really busy on Pine Island heading north, because there’s the drop-off line in the front, and then the teacher lot, [which] causes a large back-up, so [my husband and I] usually get stuck in traffic trying to turn into our parking lot,” English teacher Andrea Kowalski-Rospierski said.

The intersection at Pine Island Road and Holmberg Road serves as the central hub for getting to school. Located between the car line, the senior lot and the three closest residential neighborhoods, it becomes very easily congested with parent drivers, student drivers, buses, regular citizens and walkers and bikers crossing the street. It also proves to be a consistent place where parents drop their children off in places besides the car line.

With the many newfound tensions clogging up MSD’s transportation network, more parents than ever have chosen to use questionably-permissible methods when it comes to bringing their students to and from school. Both before and after school in previous years, parents have utilized the nearby Walmart parking lot to drop-off and pick-up their children. However, this year parents have found spots closer to campus, like turning lanes in the intersection and the side of the roads.

About 20% of students get transported in a car but outside of the car line, with approximately 61% of those being dropped off on the side of Pine Island Road and Holmberg Road in the morning and about 36% being picked up on these roads after school. Other hot spots include the junior lot and the adjacent North Community Park, and the aforementioned Walmart lot. Additionally, some students get picked up a different way than they get dropped off, and vice versa, like through the car line, bus loop or getting a ride with a friend.

This tactic not only severely bottlenecks traffic by causing numerous temporary roadblocks per day, but is also frowned upon by MSD administration.

A recent change has been made to the junior lot in the mornings: the entrance gate closest to MSD is now closed. A BSO officer monitors the entrance to the other gate, located farther away from the school on Westview Drive, only admitting those with an MSD parking pass. This change was made in an attempt to prevent those who have not paid for the privilege to park in the lot from parking there for free.

The severe traffic in the morning regularly causes many students to be late to their first classes.

“A lot of students show up to school late because of the morning traffic and the tardies are unexcused which creates a problem with their attendance,” senior Sophie Etchevers said.

While announcements are made when buses are late so that bus-driven students are excused from getting what would otherwise be tardies, other students may suffer at the hands of the now notorious traffic.