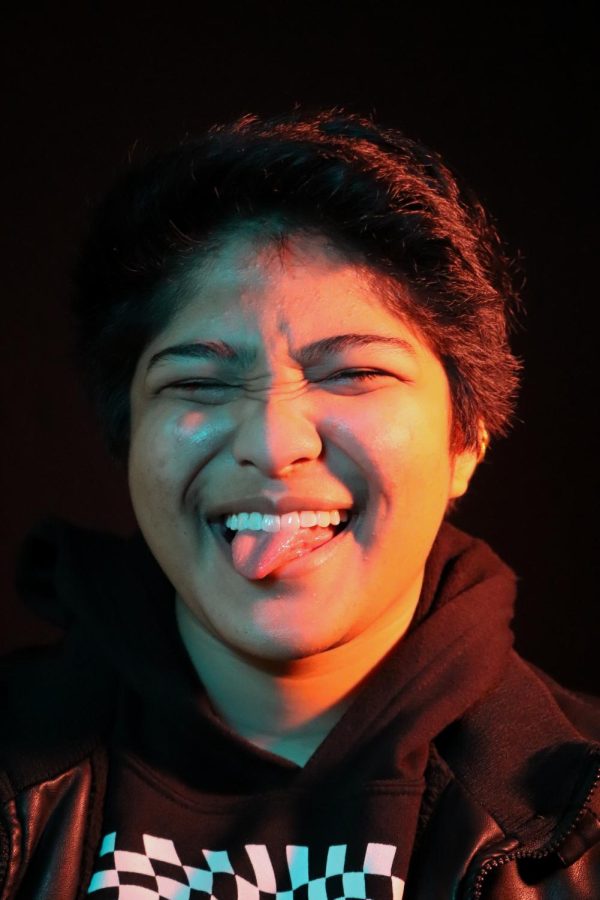 Senior Damian Francis expresses himself through his pursuit of art and music.

To junior Damian Francis, art and music are more than just leisure. They are the ways in which he expresses himself and the means by which he “documents his life.”

For nearly his entire life, Francis’ mother has been a huge inspiration to him. As someone with talents in the fields of art and music, he has always looked up to her. Throughout his childhood and continuing into his high school years, he would often ask her to play him songs on the guitar. For them, it was a way of bonding with one another.

At the start of the COVID-19 pandemic, Francis found passion and inspiration in playing the instrument himself. Having been an avid listener to his mother’s playing for many years, he took his newfound free time as an opportunity to ask his mother to teach him the guitar, and he immediately fell in love with the instrument.

Not long after, Francis’ mother enrolled him in the School of Rock. Though he has onlgy been with them for one season, Francis has already established a sense of belonging. This past December, he had the opportunity to sing and play guitar in the School of Rock’s Micheal Jackson performance. Working with other student musicians like himself, he has been able to expand his horizons and make new friends.

“I love that there’s a community, and I’ve been able to connect with people at school as well,” Francis said. “I just really like the vibes, and I enjoy being able to learn in a very accepting and very open environment.”

Though his taste in music is ever-changing, Francis finds himself mostly drawn to early 2000s music, including artists such as Weezer and Muse. His developing taste has transformed the way that he listens to songs.

Instead of simply listening to a song and memorizing lyrics, he listens to the rifts and is able to pick out how the guitar sounds, allowing him to recreate those same melodies on the acoustic guitar. Though he lives the busy life of a high school student, Francis makes sure to play at least once a week because he understands the importance of indulging in hobbies.

“I am my own inspiration when it comes to the guitar; I just want to play what I enjoy listening to,” Francis said. “Everything I do with my art and my guitar is all for me: things that I enjoy and things that I want to create. When it comes to art it’s very much a way for me to express myself, to tell my story almost, to document my life. “

Over the course of the COVID-19 pandemic, Francis has had the opportunity to engage with other musicians online. Their input allows him to develop as an artist through collaboration.

“I’ve actually started finding other people who like the guitar within my friend group already and we’ve just been collaborating a lot,” Francis said.

Though he doesn’t write lyrics, Francis does enjoy writing lines of music for the guitar. Currently, he is working with friends of his who write lyrics to create his own songs.

Not only is Francis a passionate singer and guitar player, but he is also a visual artist. Like the guitar, his inspiration for drawing also largely stems from his mother. When he was younger, she always used to draw for him. Taking after her, he started sketching at 4 years old, but in middle school around the age of 12, Francis became more serious about his artwork.

He uses his artwork as a way to engage with his feelings and express himself, often designing his own characters. It is through his hobbies that he has been able to develop as a person and express his feelings.

“Having hobbies is a fantastic coping mechanism for anybody who struggles with mental health issues,” Francis said. “Just having something that you enjoy and can look forward to is absolutely life changing. Being able to—if you feel down—just start doing something you love, it’s great.”

Ultimately, Francis’ pursuit of artwork has positively impacted his mental health. Any negative energy he has can be released therapeutically through drawing. It is a way for him to express his mood, self-perception and struggles. Just like his music, his style of art is ever-evolving.

“My art changes alongside my perception of myself; it’s most obviously seen in the way I draw myself, with portraiture shifting from the feminine to the androgyny to the masculine,” Francis said. “I’m always drawing, really, and my drawings reflect what I feel when the pen hits the paper.”

As Francis builds a collection of new life experiences, he tells his story through art and music. From his artwork, he has created a means of self-reflection, and from his music, he has discovered a community of people he is able to connect with. His pursuits of art and music have helped Francis develop a broader connection to both himself and his community.