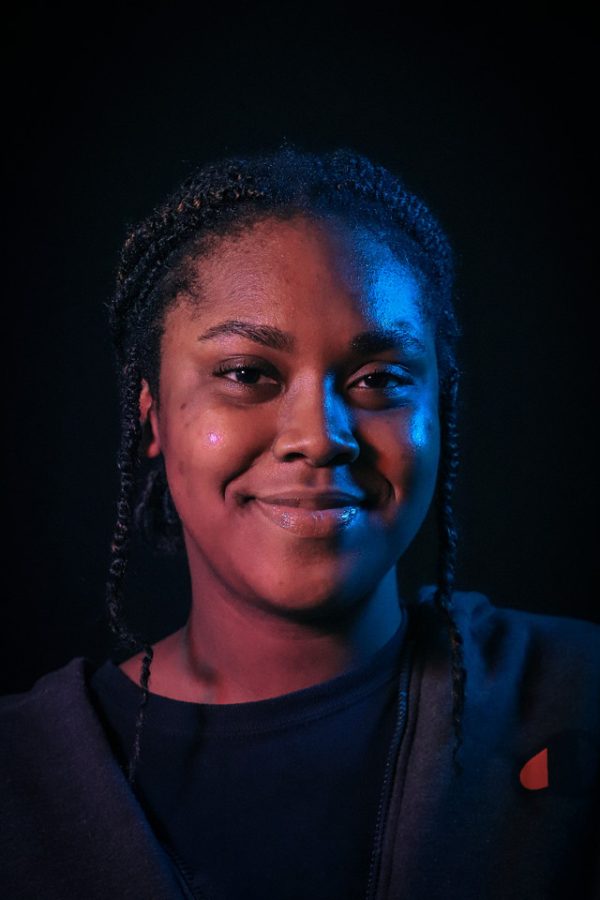 From multiple trips to the office and meetings with sponsors to plan the upcoming Black History Month show to scheduling weekly Black Student Union meetings to helping her younger brother with homework to preparing for her upcoming 8-hour debate tournaments to general homework and school responsibilities, the days of junior Noldine Belizaire are jammed packed and hectic. Balancing it all can be difficult, but the passion that Belizaire has for everything she does motivates her to stay focused and push through.

“Everything I do, I put my heart and soul into it because it represents me, and I care about it,” Belizaire said.

Attending Marjory Stoneman Douglas High School, which is 74% white, for the past three years comes with its opportunities and drawbacks for Belizaire, makes up part of the 12% of Black students.

Minorities have a history of being overlooked and unrepresented in Predominantly White Institutions here and across the nation, which Belizaire was not going to accept.

Additionally, being a woman is already a challenge within itself, often facing sexism and misogyny on a daily basis.

“There’s a lot of Black traumas that we experience at the school as Black students, like being called the n-word to [administration] not doing anything when you complain about an issue with racism here,” said Belizaire. “I definitely felt like there was a safe space needed for people that identify as female at the school; we need a place to talk about our issues.”

As a founder and the president of the Black Student Union and vice president of the Ruth Bader Ginsburg club, along with performing drama and presenting speech and debate pieces highlighting the struggles and experiences of the Black community, Belizaire makes it her goal to promote an atmosphere of inclusion around campus.

During Belizaire’s freshman year, she personally experienced and heard stories about racist incidents occurring throughout the school. When MSD transitioned to online learning, it didn’t stop. This had always left her uneasy, but after the murders of George Floyd, Breonna Taylor and Ahmaud Arbery spread across national news and the Black Lives Matter movement continued to gain momentum, Belizaire saw students making fun of their deaths during online school and knew she could not put up with it any longer.

Belizaire, along with the fellow founders of BSU—Jada Lemy, Roveschney Veillard and Nesya Small—had a meeting with MSD Principal Michelle Kefford to discuss the issues they witnessed. Following the meeting, the four created BSU to ensure students, especially from the Black community, would have a safe haven on campus and in the community.

“The goal of BSU is to unite, educate and get together. After eight hours of school, we need some type of outlet to go to, so we provide snacks and a safe space. That’s the main goal. Honestly, I needed a safe space myself,” Belizaire said.

Belizaire has noticed that freshmen make up the majority of the club and she hopes that it continues to be a safe space for new students to find like-minded individuals in the school and feel that they belong. The club conducts frequent discussions about anything relating to the Black community. One of Belizaire’s favorite discussions involved the complexities of discipline.

“Physical discipline is something that’s really popular in the community, it’s been so ingrained in our culture to the point where people make jokes about it. I was like ‘you know what, we should talk about this’ because a lot of [other] cultures and ethnicities [also] have an issue with discipline,” Belizaire said. “I wanted to bring us together to talk about this and you got to hear so many opinions of people and traumatic stories that brought the [union] closer together. ”

Belizaire personally relates to such a topic and performed a speech about the issue at recent speech and debate tournaments. The piece, entitled “Let The Healing Begin,” is a compilation of pieces of literature that highlight the generational ties of slavery with discipline and includes experiences of violence in her own home. The piece serves as tribute to victims of child abuse and helped heal Belizaire herself from past trauma.

Belizaire has participated in speech and debate, specifically Dramatic Interpretation and Program Oral Interpretation, since seventh grade. When she first began, she remembered not enjoying it and felt that the class was not for her. However, her former speech and debate coach Lisa Farris gave her a “school Black mama moment,” as she calls it. Farris, also a Black woman, saw the potential in Belizaire and expressed that she should use her platform to talk about Black issues and represent Black students in speech and debate competitions.

Her encouragement from Farris became the motivation Belizaire needed to address topics that are often overlooked, including pieces like “The Average Black Girl,” which discussed the hurtful addition of “for a Black girl/boy” at the end of compliments towards Black people showing their racist motivations and “Reporting Live From Ferguson, Missouri,” discussing the trauma Asian and Black reporters were put under during coverage of the Black Lives Matter and Stop Asian Hate movements.

“I am super proud of Noldine. She found her voice and is using it to bring life to the issues that often plague African American women. I think when she first started debate with me in seventh grade she really didn’t realize how much her voice mattered. I’m so glad she found her voice and the confidence to share it with the world,” Farris said. “She gives me way too much credit, I’m just glad I was able to support her and guide in such [a] way that has allowed her to flourish. Her voice was always there; she just had to find it, and I am so glad she did.”

Belizaire is forever grateful for Farris in supporting her throughout her career and continuing to help her even while she is in high school. Belizaire considers Farris a role model in her life and still talks with her about her current debate pieces.

“She definitely shaped me into the debater I am today,” Belizaire said.

Belizaire has placed in the Top 30 at the 2021 National Speech and Debate Tournament in Dramatic Interpretation out of 6,659 competitors overall, in the finals at the local Blue Key tournament, in the finals at the Yale Invitational High School Tournament, in the championship at Duke University and medaling at a few other out-of-state tournaments.

During her sophomore year, Belizaire decided to join MSD drama teacher Melody Herzfeld’s acting class in order to improve her storytelling skills for Dramatic Interpretation. She grew to love the class.

From there, Belizaire participated in districts, performing a group piece titled “With Their Eyes,” a collection of monologues that were originally interviews of students and staff at Stuyvesant High School, who were located across the street from the Twin Towers and viewed the Sept. 11, 2001 terrorist attacks firsthand. The team secured a Superior rating with the performance, the highest evaluation given.

Belizaire worked backstage on the technical team for MSD’s drama performance of “Puffs,” a comedy about the lives of wizards in the Hufflepuff house of the Harry Potter world. She did this to fully understand what tech has to go through to put on a production, from sound to set. In the future, she hopes to be able to participate on stage in drama shows.

Belizaire also serves as the vice president of the Ruth Bader Ginsburg Club, which advocates for female-identifying students at MSD and promotes equality of sexes in school and life, just like former Supreme Court Justice Ruth Bader Ginsberg did in her lifetime.

“There has been a lot of issues with sexual assault and harassment at this school… and there is a huge issue with the safety of women here and not a lot of people talk about that,” Belizaire said.

Belizaire joined the club to make sure female voices at the school were heard, whether over dress code or lack of acknowledgment to female students’ needs.

She plans the meetings and projects the club participates in, including their discussions of sexism in school and important female role models. They are currently discussing fixing the lack of menstrual products available for students at school.

“There were issues with no pads in the nurse’s office, so we plan on putting free pads in every bathroom to ensure that anyone who has a menstrual cycle can get those resources,” Belizaire said.

Beyond that, the RBG Club has plans to help a local homeless shelter for women in any way they can, but Belizaire hopes they can do even more in the future.

As a junior, Belizaire is already figuring out her plans after high school. She has wanted to attend a Historically Black College or University since middle school, her first choice being Florida Agricultural and Mechanical University, otherwise Howard University or Spelman College. Early admissions will help get into the process of applying to colleges now, while still participating in her many extracurricular responsibilities.